Adult Description: The Blanchard’s Cricket Frog is a small frog that averages just over 1 inch (2.5 cm) in length. While similar in length, they have a much more compact (less elongate) body plan than Boreal Chorus Frogs. Background coloration can be tan, brown, or olive green with dark variable markings. Hues of lime green, red, and rust colors are commonly observed on individuals. Typically, a dark triangle appears between the eyes, but this is not visible in all individuals. Black bands are typically present on the thighs and the ventral coloration is white. Adult males can be distinguished from females by the presence of a dark colored throat (females have a light-colored throat), though this may fade outside of the breeding season.

Larval Description: Larval Blanchard’s Cricket Frogs are small to medium in size and larger than most toad tadpoles. Tadpoles are tan in color and have lateral eyes. Both the body and the tail fin are lightly mottled in black. Typically, small black blotches are present on the dorsal portion of the tail musculature. Additionally, in environments where invertebrate predators are present, tadpoles develop a black tail tip that is used as a lure to predatory attacks away from the body.

Call Description: Male Blanchard’s Cricket Frogs produce a call that sounds like stones being clicked together, repeated slowly at first, then increasing in speed.

Habitat: Blanchard’s Cricket Frogs are abundant along most semi-permanent or permanent aquatic habitats within the regions they occur. While sandy habitats are not a necessary component of their habitat, individuals can be abundant at sandy riparian wetlands along the Missouri and James rivers.

Natural History: Unlike many frogs, this species can be highly active during the day, feeding on a variety of small invertebrates. While it is closely related to arboreal species such as the Cope’s Gray Treefrog and Boreal Chorus Frog, the Blanchard’s Cricket Frog is primarily terrestrial and rarely climbs. Additionally, because it is primarily found along aquatic shorelines, individuals display a rather unusual behavior of jumping into the water but quickly swimming back to shore. The Blanchard’s Cricket Frog is considered freeze-intolerant and overwinters in terrestrial burrows and cracks in dried mud where they can avoid freezing temperatures. Their inability to tolerate freezing temperatures and harsh winter temperatures likely limit the distribution of this species in South Dakota. Blanchard’s Cricket Frogs breed in South Dakota from June–July, though individuals may still continue to call into the fall. Most calling occurs beginning at dusk, but individuals will continue to call through the day. Males clasp females and fertilize eggs as they are released. Eggs are laid in small masses attached to aquatic vegetation and hatch in 3–4 days. Tadpoles typically complete metamorphosis in late July and continue to emerge through August.

Species Distribution: This species has a large distribution that ranges from central Nebraska, western Kansas and Oklahoma, and central Texas east to central Ohio and Kentucky.

Remarks: The species is named after Frank Nelson Blanchard, a herpetologist at the University of Michigan. 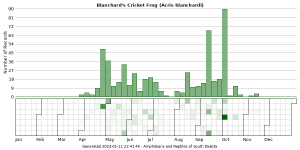 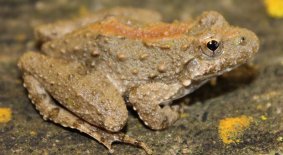