Larval Description: As juveniles, Eastern Tiger Salamanders are aquatic. Larval Eastern Tiger salamanders are typically yellowish-brown in coloration with little to no visible pattern or markings and have three pairs of external, feather-like gills used for respiration. As individuals age and begin metamorphosis, these gills begin to shrink in size and markings and patterns begin to develop on the body. Additionally, the tail is enlarged with a thin, membranous fin extending from the tail to aid in swimming, which shrinks as individuals are undergoing metamorphosis.

Habitat: Eastern Tiger Salamanders inhabit moist areas near woodlands, wetlands, and prairies. They may also occur near homes, such as in basements or root cellars. Breeding habitat primarily consists of wetlands or ponds where large predatory fish are absent.

Natural History: Much of what is known about the natural history of this species is similar to the Western Tiger Salamander. Adult salamanders are infrequently encountered as they spend the majority of their time underground, and activity can be stimulated by rain. Salamanders are typically nocturnal and are generalist predators primarily feeding on invertebrates, but also on small vertebrates. When disturbed, individuals can discharge a bitter-tasting, milky slime. Breeding typically occurs in the early spring, and the timing is determined by temperature and rainfall. Courtship can be elaborate and involve aggressive behaviors between males and females. The male guides the female to a spermatophore that he has deposited, and the female picks it up with her cloaca, fertilizing her eggs. Adult females can lay up to 1,000 eggs in small clusters typically attached to aquatic vegetation or woody debris. After a few weeks, eggs hatch into larvae, which grow throughout the summer, and most complete metamorphosis by July or August. On occasion, larval salamanders can demonstrate neoteny, where individuals become sexually mature while retaining larval characteristics and never leave water.

Species Distribution: Eastern Tiger Salamanders occupy a large area east of the Missouri and Mississippi rivers, throughout the Ohio River drainage, and along the Atlantic Coast from Florida to New York. Additionally, many scattered disjunct populations exist which are seemingly isolated from other populations.

Remarks: Research into the distributional boundary of the Eastern Tiger Salamander and Western Tiger Salamander in South Dakota is needed. Color and pattern variation and the potential to hybridize further complicates defining the exact boundary of these species in southeastern South Dakota. As larvae, these salamanders are often called a “mudpuppy” or “waterdog” and may appear similar to the Mudpuppy (Necturus maculosus), a much different salamander that is permanently aquatic and have four toes on their hind feet. Larval tiger salamanders are often sold as fishing bait, and individuals may be introduced to non-native sites by anglers. 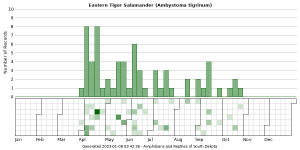 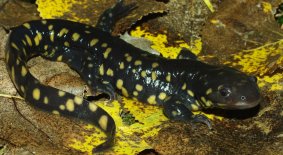