Adult Description: American Toads are a medium-sized toad with adults being approximately 3 inches (7.5 cm) in length and have a background color that is various shades of tan or brown. The back is covered in small to medium sized dark spots that typically contain one or two large reddish orange or brown warts per spot. The underside is mottled with black spots. A narrow white or pale line runs down the middle of the back. Prominent cranial crests are visible between and behind the eyes and are not fused between the eyes (no boss is present). Enlarged kidney-shaped parotoid glands are either not in contact with the cranial crests or are connected by a small spur. Adult males have nuptial pads (dark, keratinized pads) on the first and second digits of the forearms that are used to help grasp the female during amplexus (breeding) and have a dark throat; females lack these pads and have a pale throat. This species can be easily differentiated from other South Dakota toads by having a mottled underside (Woodhouse’s Toads and Great Plains Toads have white undersides) and the absence of a boss between the eyes (Canadian Toads have a boss present between the eyes and the cranial crests rarely extend between the eye and the parotoid glands).

Larval Description: Larval American Toads can be difficult to distinguish from tadpoles of other species of toads. Tadpoles are small, black, and may be covered in small metallic gold flecks. The tail fin is clear and rounded at the tip.

Call Description: Male American Toads have a melodic trill lasting from 5–30 seconds in length, that is often described as more musical and less harsh than the call of Canadian Toads.

Habitat: American Toads can be found in most aquatic habitats across their range except highly ephemeral or temporary wetlands. Semi-permanent or permanent wetlands, lakes, and reservoirs are all common breeding habitat for this species. After breeding, most adults can be found in upland prairie habitats.

Natural History: The American Toad is primarily nocturnal and is a generalist predator that consumes a variety of insects and small invertebrates. Near urban or developed areas toads will congregate under outdoor lights and catch insects that are attracted to the lights. Like most toads, American Toads have spades that allow them to be proficient at digging into the substrate to bury themselves. During winter, all toads bury themselves below the frost line (30–71 inches deep) to avoid freezing temperatures. To defend themselves, American Toads can inflate their bodies to make themselves appear larger, present the parotoid glands that discharge a milky toxic secretion, or urinate on a predator. This species breeds from May to June and typically arrives at wetlands after Boreal Chorus Frogs have arrived. As females lay eggs, males release sperm to externally fertilize up to 20,000 eggs that females can produce. Like most toads, eggs are laid in long strands and hatch shortly (1 week) after being laid. Tadpoles will undergo metamorphosis 5–8 weeks after hatching. Juvenile toads will often remain along the margins of wetlands for several weeks after metamorphosing to feed before dispersing.

Species Distribution: This species can be found across New England, Appalachia, and the Great Lakes regions, south into the northern portions of Mississippi, Alabama, and Georgia, west to the eastern borders of North Dakota and Nebraska, and north into eastern and central Canada.

South Dakota Distribution: The American Toad can be found along the eastern border of South Dakota but appears to be absent from much of southeast corner of the state.

Remarks: This species is known to hybridize with Canadian Toads and hybrids can have characteristics intermediate to both species. Contrary to popular belief, toads cannot transmit warts to humans by touching them. 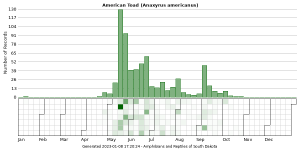 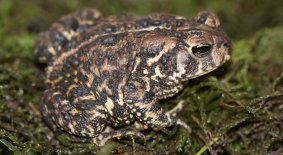 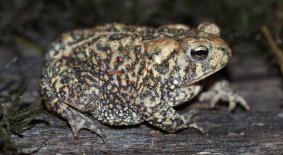