Adult Description: The Great Plains Toad is a large species of toad reaching average sizes of 3–4 inches (7–10 cm) in length. Toads have a background color that is typically light tan with 6–8 large dark green blotches often outlined in white. It has a white underside, typically with a single black spot on the chest. A narrow, white or pale line runs down the middle of the back. Like most toads, the Great Plains Toad has prominent cranial crests between the eyes that come together towards to form a V-shape. Small, rounded parotoid glands are often in contact with the cranial crests behind to the eyes. Adult males have nuptial pads (dark, keratinized pads) on the first and second digits of the forearms that are used to help grasp the female during amplexus (breeding) and have a dark throat; females lack these pads and have a pale throat. This species can be easily differentiated from other South Dakota toads by having a white underside (American Toads and Canadian Toads have a mottled underside) and the presence of 6–8 large dark green blotches often outlined in white on its back (Woodhouse’s Toads have numerous, small black spots).

Larval Description: Larval Great Plains Toads can be difficult to distinguish from tadpoles of other species of toads. Tadpoles are small, black, and may be covered in small metallic gold flecks. The tail fin is clear and rounded at the tip.

Call Description: Males have a call that is a long, extended, pulsating trill with a metallic quality often lasting from 10–50 seconds in duration. The vocal sac of males extends forward above their head when it is inflated while calling.

Natural History: This species spends a large amount of time underground and is usually only active during a few ideal weeks in the spring, summer, and fall. The Great Plains Toad is primarily nocturnal and is a generalist predator that consumes a variety of insects and small invertebrates. Like most toads, Great Plains Toads have spades on their hind feet that allow them to be proficient at digging into the substrate to bury themselves. During winter, toads bury themselves below the frost line to avoid freezing temperatures. To defend themselves, Great Plains Toads can inflate their bodies to make themselves appear larger, present the parotoid glands that discharge a milky toxic secretion, or urinate on a predator. This species is an explosive breeder. The breeding season can last from late May through July but is primarily determined by heavy rainfall events. During and shortly after heavy rain events adults emerge from burrows and proceed to ephemeral bodies of water to reproduce. Breeding activity is typically intense for one or two days, then adults leave ponds to return to terrestrial habitats. Tadpoles typically undergo metamorphosis within four weeks of hatching, often corresponding with when these ephemeral wetlands begin to dry up.

Species Distribution: This species is found throughout much of the central United States, from southern Canada through the Great Plains and eastern Rocky Mountains, to Arizona and northern Mexico.

South Dakota Distribution: The Great Plains Toad can be found across most of South Dakota but are absent from high elevation sites in the Black Hills. 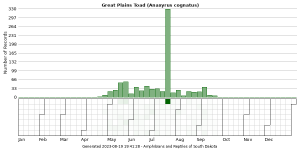 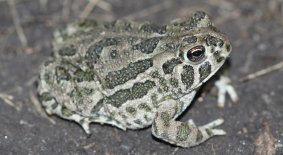 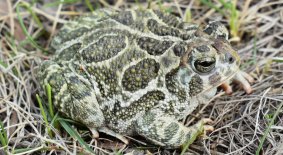