Adult Description: Adult Woodhouse’s Toads measure 3–4 inches (6–10 cm) and have a background color that is typically tan, brown, or yellowish and is speckled with numerous small, dark spots. It has a white underside typically with a single black spot on the chest just below the throat. A narrow, white or pale line runs down the middle of the back. The Woodhouse’s Toad has prominent cranial crests between and posterior to the eyes as well as elongated parotoid glands. Adult males have nuptial pads (dark, keratinized pads) on the first and second digits of the forearms that are used to help grasp the female when they are breeding and have a dark throat; females lack these pads and have a pale throat. It can be differentiated from other South Dakota toads by the presence of a white underside (American Toads and Canadian Toads have a mottled underside) and numerous, small black spots on its back (Great Plains Toads have 6–8 large blotches).

Larval Description: Larval Woodhouse’s Toads can be difficult to distinguish from tadpoles of other species of toads. Tadpoles are small, black, and may be covered in small metallic gold flecks. The tail fin is clear and rounded at the tip.

Call Description: Male Woodhouse’s Toads have a call that is often described like the bleat of a sheep, or a nasally “waaah” sound that lasts from 1–4 seconds in duration.

Habitat: Woodhouse’s Toads are primarily found in prairies and open grasslands but can be found in a wide range of habitats including riparian forests, oxbow lakes, and reservoirs. Similar to other toads, the Woodhouse’s Toad is considered a habitat generalist and can occur in almost any habitat with sufficient moisture.

Natural History: The Woodhouse’s Toad is primarily nocturnal and is a generalist predator that consumes a variety of insects and small invertebrates. Near urban or developed areas Woodhouse’s Toads will congregate under outdoor lights and catch insects that are attracted to the lights. Like most toads, Woodhouse’s Toads have spades that allow them to be proficient at digging into the substrate to bury themselves. During winter, all toads bury themselves below the frost line (30–71 inches deep) to avoid freezing temperatures. To defend themselves, Woodhouse’s Toads can inflate their bodies to make themselves appear larger, present the parotoid glands that discharge a milky toxic secretion, or urinate on a predator. This species breeds from late May to late June in oxbow lakes, reservoirs, and semi-permanent or permanent wetlands. As females lay up to 25,000 eggs, males release sperm to externally fertilize these eggs. Like most toads, eggs are laid in long strands and hatch shortly (1 week) after being laid. Tadpoles undergo metamorphosis 5–8 weeks after hatching. Juvenile toads will often remain along the margins of wetlands for several weeks after metamorphosing to feed before dispersing.

Species Distribution: This species is found throughout much of the central United States. Their distribution stretches from Louisiana north into North Dakota, spreads as far west as Arizona and Utah, and south into Mexico, with isolated populations also occurring in the northwestern United States (Washington, Oregon, and Idaho).

Remarks: Contrary to popular belief, toads cannot transmit warts to humans by touching them. The species is named after Samuel Washington Woodhouse, a 19th century surgeon and naturalist who participated in early expeditions to the southwestern United States. 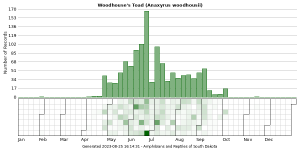 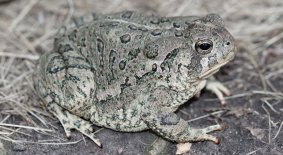 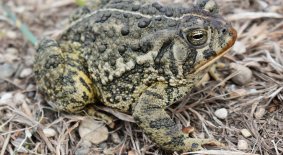