Description: Spiny Softshells are named for the characteristically leathery, round, flat carapace. Like the Smooth Softshell, the bony elements of the carapace and plastron are reduced. Adult males have a carapace length of 4–12 inches (10–30 cm) and adult females a carapace length of 8–16 inches (21–41 cm). The body and carapace are brown to olive-green in coloration. Patterning on the carapace varies by sex: males have a series of dark, circular spots covering the carapace with a light tan margin, and females have numerous dark brown blotches and small black dots covering the carapace. Juvenile females will possess dark, circular spots like males, but these fade as they age. The head and neck are olive green and often mottled with light and dark specks. The plastron is pale and unmarked. A dark-bordered whitish or yellow line runs from behind the eye to the neck, with a similar line along the upper lip. The feet are highly webbed and form a paddle to assist it while swimming in swift currents. Feet are streaked with black lines. The neck is long, and the head tapers into an elongated snout. Unlike Smooth Softshells, the Spiny Softshell has fleshy tubercles on the anterior margin of the carapace, giving it a sandpaper-like texture, and has a projection extending into the nostril from the nasal septum. In addition to being smaller than females, males have a proportionally larger, longer tail, with the cloaca at the tip of the tail.

Habitat: Spiny Softshells are highly aquatic turtles and are considered habitat generalists. They can be found in many riverine habitats with sandy or muddy bottoms, but also backwaters, oxbow lakes, and other impoundments.

Natural History: Spiny Softshells feed primarily on aquatic insects and fish but will also eat snails, mollusks, amphibians, vegetation, and carrion. These turtles spend a large amount of time basking on sandbars, muddy banks, or woody debris. Turtles overwinter in the sand or mud substrates of the habitats they are found in. Individuals breed in the early spring. As males attempt courting, unreceptive females will respond by biting the carapace of males. Nests are dug on sandbars or river shorelines with little to no vegetation. Females typically lay 12–18 eggs in June that will hatch in August. Eggs are white, leathery, and spherical in shape. Sex of hatching turtles is determined genetically, rather than by temperature. Males reach sexual maturity in four years while females take up to seven years.

Species Distribution: This species has an extensive range throughout much of the central and eastern United States. Spiny Softshells can be found from the Great Lakes Region south to the Gulf of Mexico, west to the Rocky Mountains and Texas, with scattered populations in New Mexico, Arizona, and California.

South Dakota Distribution: This species occurs along the Missouri River and other large rivers, including the Belle Fourche, Big Sioux, Cheyenne, James, Keya Paha, Minnesota, Vermillion, Whetstone, and White rivers. The Spiny Softshell appears to be less abundant along the Missouri River than the Smooth Softshell. Verifiable records of Spiny Softshells are needed to better understand the distribution of this species in South Dakota.

Remarks: Their name refers to the presence of small tubercles on their carapace. Spiny Softshells can survive underwater for extended periods of time due to their ability to absorb oxygen from the water through membranes in the mouth and the cloaca. These turtles are occasionally caught on fishing lines. If this occurs, care should be taken to remove the hook from the individual before it is released. 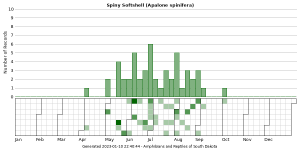 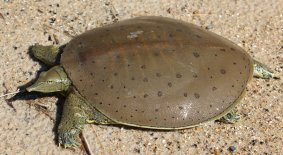 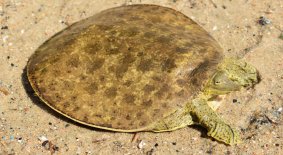