Description: This slim lizard has a pointed snout and a rough gray tail nearly twice its body length. Adult total lengths range from 6–11 inches (15–28 cm). Aptly named, this lizard has six yellow-green, white, or pale blue stripes running down its back and sides with a brown, black, or olive background body color. An additional subtle brownish stripe runs down the middle of the back. A bright green wash occurs over these lines on the front third of the body, including the head. Adult males have a light blue chin during the breeding season and bluish-white unmarked undersides. Females have a salmon-pink to white unmarked underside. Body scales are small and rounded, and the ventral scales are flat, squared, and in eight straight rows. Juveniles look similar to adults but often have a slightly blue tail that fades as they age.

Habitat: Six-lined Racerunners can be found in sunny, open, well-drained, grassy habitats with areas of bare sand or loose sandy soil such as prairies, riverbanks, abandoned fields, or alongside edges of gravel or dirt roads. Areas with dense vegetation are avoided. They prefer low elevations with dry sandy soil.

Natural History: This terrestrial, diurnal lizard is active during the heat of the day. Its diet includes a variety of insects, spiders, and other invertebrates. Like many other species in the genus, individuals prefer air temperatures greater than 90°F (32°C). Six-lined Racerunners are highly visual and very fast, moving at speeds up to 18 miles per hour if threatened. The tail helps with balance while running, and they typically do not drop their tail to distract predators. This species is also proficient at burrowing and seeks shelter in burrows during intense heat and when avoiding predators. Individuals will overwinter in burrows to avoid freezing temperatures. Breeding occurs in late spring or early summer after emergence from hibernation. A male will try to attract a female by showing off his colorful blue chin and undersides. If receptive, a female will allow a male to copulate with her. The female will then dig a nest up to 4 inches (10 cm) deep in sandy soils and lay a clutch of 1–6 eggs (average of 3). She may lay another clutch several weeks later. Eggs hatch two months later, usually in August, with sexual maturity reached the following year. Unlike the

Many-lined Skink and Prairie Skink, there is no parental care by Six-lined Racerunners.

Species Distribution: This species occurs throughout much of the southeastern United States from the Atlantic Coast to the Great Plains and up the Missouri and Illinois river drainages.

South Dakota Distribution: This species has been documented only in southwestern South Dakota, but it may occur in additional areas in the south-central region of the state. Recent observations have occurred on sand dunes along the Missouri River in southeastern South Dakota, though no verifiable records exist. 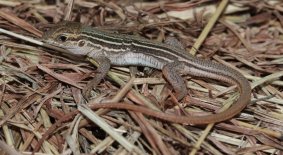