Description: The Snapping Turtle is the largest species of turtle in South Dakota, with adults having carapace lengths of 9–20 inches (23–51 cm) and an average weight of 12.8 pounds (5.8 kg). The largest Snapping Turtle ever recorded from South Dakota was a female that weighed 44 pounds (20.0 kg). Snapping Turtles have a unique long tail (all other South Dakota turtles have short tails), a large head, long neck, and a highly reduced plastron. The carapace, head, limbs, and tail are typically dark in coloration, though the plastron and undersides of the body and neck are a pale cream color. Fleshy tubercles occur along the neck and parts of the limbs. The feet are large, and the digits have long claws. The tail has large sawtooth-like scales that run down the midline and get smaller toward the tail tip. The posterior marginal scutes on the carapace are serrated and not smooth (unlike the lateral and anterior marginal scutes). The carapace has three small ridges (keels), which are more visible in juveniles. It can easily be distinguished from other South Dakota turtles by the presence of a long tail and a reduced plastron. It can be difficult to determine the sex of small juveniles, but adult males are typically smaller than females and the opening of their cloaca is farther from the posterior edge of the cloaca.

Habitat: Snapping Turtles can be found in almost any aquatic habitat, including lakes, rivers, reservoirs, cattle ponds, and other wetlands.

Natural History: Snapping Turtles are primarily carnivorous, feeding on most invertebrates and small to medium-sized vertebrates, including fish, amphibians, snakes, birds, and small mammals. Snapping Turtles may also eat algae, vegetation, and carrion. Individuals use their powerful jaws and sharp claws to rip carrion and large prey apart before consuming it. These large turtles are typically ambush predators. Adult males are territorial and can be aggressive to rival males. During the day, individuals often rest at the bottom of shallow areas and extend their long necks to expose the head above the water to breathe. In the water, Snapping Turtles are typically calm but can be defensive or aggressive while encountered travelling overland. Individuals are known to bask on large logs and will overwinter in mud and organic material at the bottom of aquatic habitats. Snapping Turtles breed in the spring, and females will dig a nest 4–7 inches (10–18 cm) deep in sandy soils and deposit 25–90 eggs from June to July. Eggs are white, leathery, and spherical in shape and hatch in four months. Like most turtles, the sex of juveniles is determined by temperature: high temperatures result in females and low temperatures result in males. Females can also store the sperm received from males for at least two years.

Species Distribution: This species occurs throughout most of the eastern two-thirds of the United States. Most aquatic habitats east of the Rocky Mountains, from southern Canada to south Texas are occupied by this species. Additionally, disjunct populations of this species occur in southern Mexico and through parts of Central America.

South Dakota Distribution: This species likely occurs statewide, but records documenting its distribution are limited. It may be less abundant in arid areas of the state due to limited aquatic habitats.

Remarks: The Snapping Turtle is one of the most common species of turtle in South Dakota and is considered a game species. Often, individuals are covered in mud or algae, obscuring most of the carapace. Though individuals are known to consume waterfowl and game fish, studies have found these prey items make up a small percentage of the diet. When handling these turtles, it is best to carry them by their hind limbs with the carapace facing away from your body. Handling individuals by the tail can cause damage to their spinal cord. 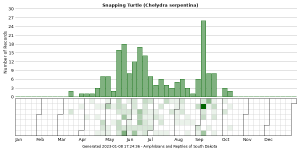 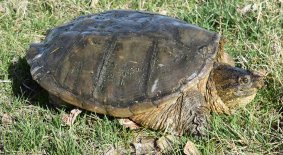 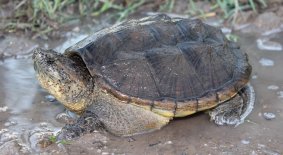