Description: Painted Turtles get their name from the vibrant markings of color along their head, neck, and shell. Adult Painted Turtles have carapace lengths 3–9 inches (9–23 cm) and an average weight of 1 pound (450 g). The smooth, unkeeled carapace is primarily olive green or brown and decorated with thin orange or red lines. The marginal scutes often have a thin red edge. The marginals form a smooth, non-serrated edge along the carapace. The plastron is primarily red or orange but has a series of dark markings that vary in shape and size on the plastron, and these colors fade with age. Similarly, the skin of this turtle ranges from olive to black, with stripes of yellow occurring along the neck, limbs, and tail. The Painted Turtle has yellow eyes with a horizontal dark bar through the pupil and two wide yellow stripes that start at the chin and extend to the tip of the notched upper jaw, forming a wishbone pattern. Males are typically smaller than females, have thicker tails with cloacal openings farther from the edge of the carapace, and have elongated claws on the forelimbs. Reticulate melanism occurs in some populations. This is a black, net-like pattern that overlies the normal carapace pattern.

Habitat: Painted Turtles occupy a wide variety of habitats including permanent and temporary bodies of waters, ranging from large reservoirs to wetlands throughout the Prairie Pothole Region. Typically, they occur in shallow habitats with little to no flow and abundant vegetation where individuals can forage and seek refuge from potential predators.

Natural History: A diurnal species, the Painted Turtle typically spends the nights sleeping, becoming active around sunrise. Like most South Dakota turtles, on sunny days this species spends several hours basking on logs, rocks, and other surfaces individually or in groups. Painted Turtles are omnivorous and actively forage for a wide variety of food items, including plants, algae, aquatic insects, fish, and crustaceans. During winter months, Painted Turtles bury into soft mud at the bottom of wetlands to avoid freezing temperatures. Most breeding occurs from early May to June. Males pursue females in the water. A male will stroke the female’s face and neck with his elongated claws. If the female is receptive, mating occurs on the substrate with the male positioned on top of her, his tail extended so the two cloacal openings are in contact. Females lay eggs from June to July. Clutches of 5–15 elongated eggs are laid 5 inches (12 cm) deep in sandy substrate, including wetland margins or on or along dirt roads. Sex determination is temperature dependent with high temperatures producing females and low temperatures producing males. Eggs typically hatch in August. Sexual maturity is reached in four to six years. In some areas, juveniles may remain in the nest after hatching, surviving prolonged freezing temperatures and living off energy reserves, before emerging the following spring.

Species Distribution: This species can be encountered across North America, reaching west into British Columbia, north into Nova Scotia, and throughout the eastern and midwestern United States. Few isolated populations also occur in the southwestern United States and Mexico.

South Dakota Distribution: The Painted Turtle is South Dakota’s most common turtle and can be found in nearly every permanent body of water throughout the state. Though Painted Turtles do occur in the Missouri River, they appear to be much less abundant than False Map Turtles in the free-flowing segments of the river, such as below Gavins Point Dam.

Remarks: Painted Turtles are often caught, kept as pets, and released back into the wild when they reach large sizes. Releasing captive animals back into the wild can introduce pathogens and diseases to populations and should be avoided. 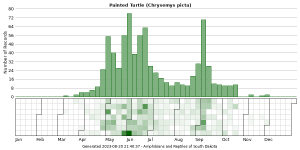 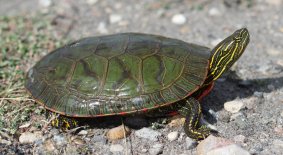 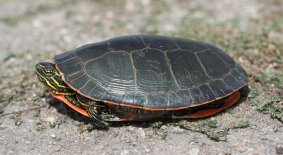