Description: The North American Racer is a slender, moderately long snake. Adults range from 20–65 inches (51–165 cm) in length. In South Dakota, adults typically are an olive-green to greenish-gray color with a pale-yellow underside. Juvenile North American Racers are much different in appearance from adults. Juvenile snakes have a series of reddish-brown blotches that run the length of the individual, with a row of smaller blotches on each side. As individuals age, this pattern fades and typically disappears during the second or third year. Individuals have smooth scales, giving them a shiny appearance, and have divided anal scales. The eyes are relatively large (especially as juveniles). As adults, the only other snake species that looks similar is the Smooth Greensnake, but North American Racers are considerably larger. Both the Western Foxsnake and the Gophersnake look similar to juvenile North American Racers due to their blotched pattern. The Western Foxsnake and Gophersnake both have keeled scales whereas the North American Racer has smooth (unkeeled) scales.

Natural History: This is an active, alert, and swift diurnal snake that uses its speed to capture prey. It is a visual predator often hunting with its head elevated off the ground to allow it to look for potential prey. Small mammals, lizards, insects, and other snakes are all major components of this species’ diet. Individuals have even been recorded consuming Prairie Rattlesnakes in the Black Hills. The North American Racer does not kill its prey with constriction but instead swallows prey alive. Individuals are non-venomous. It is primarily a ground-dwelling snake but will climb into bushes and trees in pursuit of prey. When alarmed, individuals will vibrate their tail, and if captured, individuals frequently bite, struggle, and discharge musk and waste in an attempt to be released. Individuals overwinter in underground dens, including rock crevices and abandoned mammal burrows, often sharing these locations with Prairie Rattlesnakes or Milksnakes. Mating often takes place in May and early June after emergence from hibernation. Males detect females through their scent and will pursue females until they become receptive to mating. After copulation, females will lay 8–21 eggs in late June to July. Larger females are able to produce greater numbers of eggs. Eggs often hatch in late August or early September. Upon hatching, young are 9–13 inches (23–33 cm) in length and have much different patterning than as adults.

Species Distribution: This species has one of the largest distributions of any North American snake, being found from the east coast to the west coast of the United States and south into Central America.

Remarks: North American Racers vary greatly in their appearance across their broad range. This species is one of the most common snakes in the Great Plains. 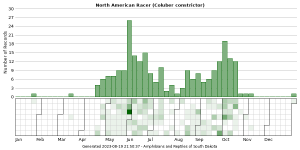 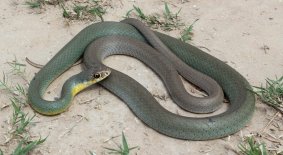 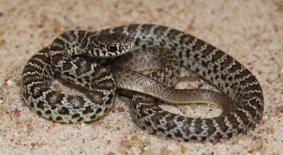