Description: The Prairie Rattlesnake is a large, heavy-bodied snake, with adults ranging from 36–50 inches (91–127 cm) in length. The background coloration is light gray or tan with pronounced dark brown blotches ringed in white running down the length of the body. These blotches fade towards the tail and turn into bands. Smaller blotches run along the sides. Two white lines occur on each side of the face: one runs between the eye and the nostril and along the upper lip, and the other begins behind the eye and runs down the neck. Prairie Rattlesnakes have elliptical (vertical) pupils, a single heat pit located between the eye and the nostril, and a triangular head. The unmarked underside is light yellow. Scales are keeled, giving individuals a rough texture, and the anal scale is undivided. Many large non-venomous snakes are confused with rattlesnakes because they often vibrate their tail, however, only the Prairie Rattlesnake has a true rattle on the end of its tail.

Habitat: Prairie Rattlesnakes occur in grasslands, prairies, and spruce forests throughout their range and are often associated with rocky outcrops or prairie dog towns.

Natural History: Prairie Rattlesnakes feed primarily on rodents but will also consume birds and lizards. These ambush predators will wait until prey are nearby before striking and envenomating them with hemotoxic venom. As with all other rattlesnakes, Prairie Rattlesnakes have two large, hinged fangs that fold up at the roof of the mouth when at rest. The heat pit contains nerves that are sensitive to heat to help individuals locate prey and select habitats. Prairie Rattlesnakes have cryptic coloration that can make them difficult to locate when they are not moving. However, when disturbed, Prairie Rattlesnakes can rattle their tail and may strike. The rattle is made of keratin. Rattlesnakes are born with a “button” and cannot make a rattling noise until their first shed. Individuals will often overwinter in the same sites, usually abandoned prairie dog burrows or rock crevices, every winter. Mating often takes place in late spring and early summer after individuals have emerged from hibernation. Males compete in combat rituals where individuals rise up and intertwine with one another, attempting to push the other to the ground. The winner gains the ability to mate with a nearby female. Females give birth to 8–17 live young and show parental care by remaining with the young for several days after they are born.

Species Distribution: This species can be found throughout the western Great Plains and the Rocky Mountains from west Texas north to southern Canada. An isolated population in the Loess Hills of northwest Iowa represents the easternmost population of this species.

Remarks: The Prairie Rattlesnake is the state’s only snake that can be dangerous to people. Contrary to popular belief, you cannot age a rattlesnake by counting the number of segments on the rattle. Rattles gain segments every time the snake sheds its skin, which can be multiple times per year, and segments can become brittle, crack, and break off. It is commonly believed that juvenile rattlesnakes are more dangerous than adults due to their inability to control the amount of venom that they inject; however, there is no evidence to support this claim. Prairie Rattlesnakes were likely more common in southeastern South Dakota prior to agricultural development in the region. 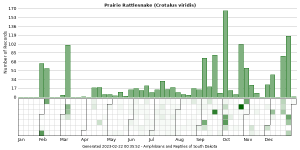 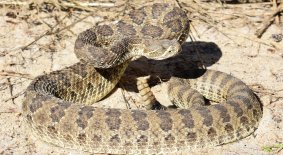 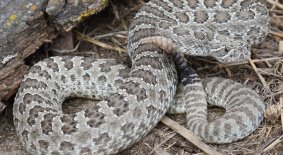