Description: The Ring-necked Snake is a small and slender snake. Adults are typically 10–14 inches (25–36 cm) in total length. The coloration of Ring-necked Snakes varies across their range. In South Dakota, individuals have a gray dorsal coloration with a black-bordered orange or yellow ring around the neck. The underside is typically yellow along the body and shifts to orange or red under the tail. The ventral scales may also contain various amounts of black mottling. A white line is often present running along the upper lip. All individuals have non-keeled scales giving them a smooth, shiny appearance and have a divided anal scale. Juveniles are similar in appearance to adults though they typically have a darker background coloration that lightens with age.

Habitat: Ring-necked Snakes can be found across a variety of habitats where they occur, though they primarily are associated with open, riparian woodlands and grasslands near wooded areas. Rocky outcroppings in these habitats provide both hibernacula and refuge. In habitats where there is sufficient cover, their density of individuals can be high.

Natural History: Ring-necked Snakes are active from April to October, are rarely found outside of cover objects. primarily nocturnal. Individuals rarely are observed basking, and during hot, dry periods, individuals will seek refuge in underground burrows or rock crevices. Prey consists mostly of small arthropods, earthworms, and occasionally small lizards and snakes. The Ring-necked Snake is mildly venomous; the enlarged posterior teeth can introduce toxic saliva into its prey. When threatened, individuals will coil their tails showing the bright red underside while hiding their head under the coils of the body. This posturing is thought to reduce predation by startling the predator or directing predatory strikes away from the head and toward the tail. Upon capture, individuals will often release a foul-smelling musk and will rarely bite. Individuals overwinter underground beneath the frost line, often in rock fissures or small burrows. Mating typically takes place soon after emergence from hibernation in April. After copulation, females will typically lay 3–8 eggs in June or July in a nest in moist areas in existing burrows, rotting logs, or under rocks. Larger females can produce more eggs. Occasionally, multiple females may use the same nesting site. Eggs typically hatch two months after being laid, and hatchlings are usually 4–5 inches (10–13 cm) in total length. Juveniles reach sexual maturity at two or three years of age.

Species Distribution: Ring-necked Snakes can be found across most of eastern and central United States, through the desert southwest and along the Pacific Coast. Isolated populations appear to be present in the Rocky Mountains and Great Basin and they are absent from the northern Great Plains.

Remarks: Ring-necked Snakes vary greatly in their appearance across their broad range. Populations vary in their ventral coloration, and some populations lack the characteristic collar on their neck. 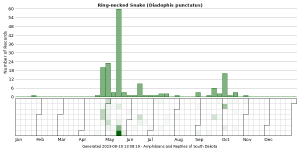 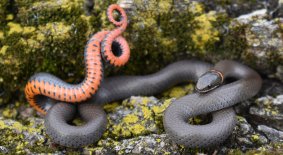 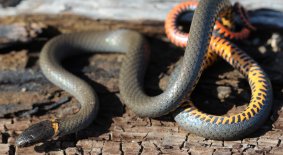