Description: The Blanding’s Turtle is a medium-sized turtle with a large, domed carapace. Adults have carapace lengths ranging from 5–9 inches (13–23 cm). The carapace is typically dark and covered in small flecks of yellow. The plastron is light yellow to tan in coloration with several dark blotches on each of the scutes, with a single hinge just behind the front limbs. This hinge raises the plastron, allowing individuals to retract their head and neck into the protective shell. The top of the head is similar in patterning to the carapace, and the lower jaw, throat, and neck are solid yellow. Additional characteristics include a long neck, protruding eyes, and a notched upper jaw. Males are typically smaller than females and have a longer tail and a slightly concave plastron.

Habitat: Blanding’s Turtles can be found in wetlands or other permanent bodies of water with little or no flow, high amounts of vegetation, and sandy substrates.

Natural History: Blanding’s Turtles are omnivores, often feeding on fish, frogs, carrion, invertebrates, and plant material. Though large, these turtles are agile swimmers and capable of chasing down prey in the water. Blanding’s Turtles are active during the day and often bask on logs, banks, and clumps of vegetation. This turtle is primarily aquatic, although they will travel long distances overland. Individuals overwinter in mud and organic material at the bottom of aquatic habitats and may also estivate during periods of warm temperatures. Most breeding activity takes place in the early spring and continues through May. Courtship involves a series of steps that can last several hours and includes males chasing, mounting, biting, and attempting to stimulate females to reproduce. Females dig nests that are 7 inches (18 cm) deep in sparsely vegetated sandy upland habitats and lay eggs from May to June. Clutch sizes range from 5–12 eggs (an average of 8). Eggs hatch in two months, and the sex of juveniles is determined by the temperature of the nest. Sexual maturity may take 14–20 years, with males often reaching maturity at faster rates than females.

Remarks: The species is named after William Blanding, an early naturalist from Philadelphia. The only verifiable record of this species is from a specimen collected in the Big Sioux River near Sioux Falls in 1963. Given that Blanding’s Turtles are primarily recognized as occurring in wetland habitats, rather than rivers, it raises questions about whether this record from the Big Sioux River in Sioux Falls represents a wild individual or a released pet. 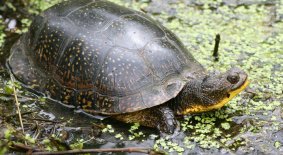 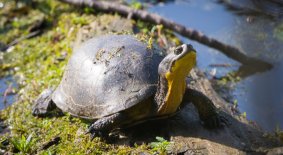