Description: The False Map Turtle is a riverine turtle with adult carapace lengths ranging from 9–10 inches (23–25 cm) in females and 4–6 inches (10–15 cm) in males. The carapace is brown to olive in coloration, often with a dark mark on each scute, with a ridge (keel) along the midline and posterior marginal scutes that are serrated. The carapace also has pale yellow lines that form a reticulated pattern on the shell, though this is more prominent in juveniles than adults. The plastron lacks a hinge and is a pale cream or yellow in coloration with dark blotches that can fade over time. The undersides of the marginals are yellow with black circles or lines. Additionally, the neck, head, and limbs are covered in bright yellow lines, with a distinct “L” mark just behind each eye. The hind feet are highly webbed and form a paddle to assist it while swimming through swift currents. Males are typically smaller than females, have thicker tails with cloacal openings farther from the edge of the carapace, and have elongated claws on the forelimbs. The False Map Turtle can be differentiated from Painted Turtles by the presence of a ridge (keel) running down the midline of the carapace and the serrated marginals on the posterior end of the carapace.

Habitat: This is primarily a riverine species, commonly found in large rivers but noticeably absent in reservoirs. They can also occur in slower backwaters and oxbow lakes in river floodplains. Juveniles are typically found in slower-moving water and more vegetated habitats than adults.

Natural History: False Map Turtles are omnivorous, feeding primarily on invertebrates, but also fish, carrion, and vegetation. Juveniles are primarily carnivorous and become increasingly herbivorous as they age. These turtles spend many hours on sunny days basking on rocks and logs and are primarily active during the day. The False Map Turtle is a strong swimmer, as it inhabits rivers with moderate to swift currents. Individuals overwinter in mud and sand at the bottom of rivers. Dry winters may result in individuals being exposed to freezing temperatures or being vulnerable to predators, like raccoons. Most breeding activity takes place in early spring with males pursuing females and flicking their long forelimb claws along the female’s head and neck to increase her receptivity to mating. If receptive, the male mounts the female and copulation occurs on the substrate. Females dig nests on clear sandbar habitats from May to June and lay 12–16 eggs. Eggs hatch approximately two months later, with warmer incubation temperatures producing females and cooler temperatures producing males.

Species Distribution: This species occurs in the Mississippi and Missouri Rivers and large tributaries that feed them from North Dakota and Minnesota south throughout much of Missouri, Arkansas, Louisiana, and east Texas.

South Dakota Distribution: This species only occurs in the Missouri River and associated large tributaries. Historically, the False Map Turtle was considered the most common species of turtle throughout the upper Missouri River in South Dakota, but verifiable records are lacking, and populations have likely declined due to habitat modification.

Remarks: Map turtles get their name due to the patterning on their shells, especially in young individuals, where the concentric yellow lines look like a topographic map. Habitat modification along the Missouri River due to the construction of dams and reservoirs has likely resulted in widespread declines of this species in the state, though this species remains relatively common in free-flowing segments of the Missouri River. The False Map Turtle is threatened and protected by state law. 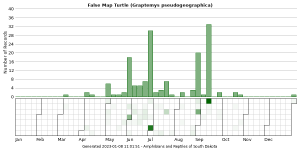