Description: The Plains Hog-nosed Snake is a moderately long, robust snake, with adults ranging from 15–26 inches (38–66 cm) in length. As the name implies, the Plains Hog-nosed Snake has an upturned rostral scale at the tip of the snout with a sharp point and a central ridge. The background coloration is typically light brown or tan, and a series of brown dorsal and lateral blotches run the length of the body. An elongated dark brown blotch is present on each side of the neck. The head has a dark brown line that runs between and through the eyes and to the corner of the mouth. The underside is tan or light yellow in coloration with pronounced black markings. Scales are heavily keeled, giving individuals a rough texture, and the anal scale is divided. Juveniles are similar in appearance to adults. The Plains Hog-nosed Snake is similar in appearance to the Eastern Hog-nosed Snake but can be easily differentiated by the presence of black pigmentation on the underside and a more sharply upturned snout (Eastern Hog-nosed Snakes lack black pigmentation on the underside and have a less sharply upturned snout).

Habitat: The Plains Hog-nosed Snake is primarily found in grasslands with loose, well-drained, sandy soils. They can also occur near aquatic habitats such as rivers and reservoirs across their range.

Natural History: The Plains Hog-nosed Snake is adapted for burrowing, using its upturned snout as a shovel and moving its head side to side. Individuals are active from May to September and are typically active in the morning and evening. Plains Hog-nosed Snakes feed primarily on frogs and toads, though they will also consume birds, mammals, and eggs. Enlarged, hinged fangs in the rear of the mouth can deliver mild venom to prey and deflate toads. This species (like the Eastern Hog-nosed Snake) has elaborate anti-predator displays. When threatened, it will flatten its head and neck, creating a cobra-like hood, and hiss and thrash its head. If agitation continues, they simulate death by opening their mouth, rolling upside down, writhing, and releasing a foul-smelling musk, before going limp until the predatory threat passes. Plains Hog-nosed Snakes overwinter in burrows. Mating often takes place in late April when individuals have emerged from hibernation, though mating occasionally occurs in the fall. Approximately one month after copulation, females lay 4–20 eggs (average of 9) in nests in sandy soils. Eggs hatch in two to three months.

Species Distribution: This species can be found across much of the central United States, throughout the Great Plains and east of the Rocky Mountains. Isolated populations of Plains Hog-nosed Snakes exist throughout Illinois, Iowa, Missouri, and Minnesota.

South Dakota Distribution: Plains Hog-nosed Snakes are likely found throughout the state of South Dakota, though they appear to be more abundant in the western half of the state. Their cryptic nature has likely contributed to gaps in the recognized distribution in the state.

Remarks: Though mildly venomous, these snakes are not dangerous to people. This venom, produced by paired Duvernoy’s glands in the upper jaw, is a modified saliva that can immobilize prey. Bites from Plains Hog-nosed Snakes are uncommon, but a bite may cause slight swelling and discoloration at the site. Plains Hog-nosed Snakes are sometimes called “adders” or “cobras” due to their tendency to flatten their necks. 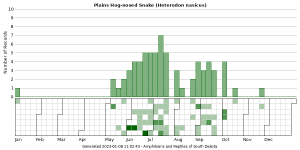 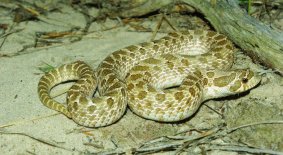