Description: This medium-sized lizard ranges from 4–5 inches (10–13 cm) in total length as an adult. As the name implies, this species lacks external ear openings. The background color of the head, body, limbs, and tail is a light gray or grayish brown. The dorsal patterning consists of mottled tan or light brown marks diffused with darker blotching. Usually, there are 8–14 dark spots down the back and pale stripes along the sides. The underside is white and lacks patterning and the scales are large and overlapping. There are two dark, diagonal bars along the lateral sides just behind the forearms. The tail is relatively short compared to that of other lizards and is often as long as the body. Reproductive males are larger than females, have enlarged femoral pores, and blue coloration surrounding the two black bars along the sides; reproductive females often develop orange coloration along the sides. This species can be distinguished from other South Dakota lizards by the absence of external ear openings and presence of two black diagonal bars on each side.

Natural History: This diurnal lizard is an active predator. The diet includes a variety of insects and spiders. During the heat of the day, it seeks shelter in the shade of vegetation or in rodent burrows. Temperatures above 70°F (21°C) are preferred, with minimal activity when it is cool or overcast. They may also bury themselves in sandy, loose soils to thermoregulate and avoid predators such as snakes, birds, and mammals. During the winter months, individuals will use existing mammal burrows to avoid freezing temperatures. Common Lesser Earless Lizards are territorial and have a small home range, as with most lizards. Dominant males show their assertiveness by bobbing their head or pushing their body up and down. These behaviors also help attract females. Sexual maturity is reached around 1 year of age and reproduction occurs in the spring, typically April, when individuals have emerged from hibernation. If a female is receptive to a male, she will allow him to mount and copulate with her. Females lay 3–9 eggs in a shallow nest usually dug in sandy soils in May or June. Eggs usually hatch two months later. Occasionally, females may produce a second clutch later in the summer.

Species Distribution: This species is found from south-central South Dakota to Texas and central Mexico, and west into Arizona.

South Dakota Distribution: This species is found only in south-central South Dakota where the Sandhills extend into the state. South Dakota records are few, and additional field surveys may better document the species distribution. Areas with suitable habitat include Pine Ridge and Rosebud tribal reservations, as well as Buffalo Gap National Grasslands.

Remarks: The long legs and toes of this species allow them to swiftly run across sandy surfaces. 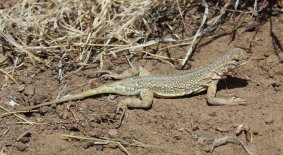