Adult Description: The Cope’s Gray Treefrog medium-sized frog with adults usually ranging from 1–2 inches (2.5–5 cm) in length. Dorsal coloration of adults can either be gray or bright green in color, and individuals have the ability to change colors within a few hours. This coloration is often determined by environmental factors. Irregular dark green or black blotches are often present on the back. The underside is typically pale gray or cream in color. Typically, a gray stripe passes through the eye and continues behind to the jaw to the underside of the individual and there is a light spot below each eye. On the inside thigh of adults is a large patch of bright yellow that is often concealed when individuals are resting. Because they are highly arboreal, adults have large toe pads at the ends of each of the digits that allow it to climb well. Adult males can be distinguished from females by the presence of a dark throat.

Larval Description: Larval Cope’s Gray Treefrogs can easily be distinguished from all other tadpoles by the presence of red or orange pigmentation in the tail fin. Tadpoles also have a highly arching, mottled tail fin and lateral eyes. This bright coloration on the tail serves as a lure to direct predatory strikes from invertebrates away from the body and towards the tail.

Habitat: Cope’s Gray Treefrogs can be found breeding in riparian wetlands, fishless ponds, or flooded fields near forests or shelterbelts. Adults move to these wetlands to breed but then return to upland, forested habitats where they are difficult to detect.

Natural History: Cope’s Gray Treefrogs are primarily nocturnal and forage on a wide variety of invertebrates. Outside of breeding, adults are rarely encountered on the ground. During the winter, this species hibernates above the frost line in the soil under debris and leaf litter. This species produces plasma glycerol, an antifreeze compound, in the liver to counteract the effects of freezing on body tissues. Male Cope’s Gray Treefrogs begin calling at wetlands or surrounding trees or shrubs in early June. Males clasp females during reproduction and fertilize the eggs as they are being laid by the female. Females lay anywhere from 900–3,000 eggs in 20–90 clusters on submerged vegetation. Eggs hatch in 5 days and tadpoles typically complete metamorphosis in 2 months.

Species Distribution: This species is common throughout most of the central and eastern United States. Due to difficulty discerning this species from the Gray Treefrog (Hyla versicolor), species distribution maps may not be completely accurate.

South Dakota Distribution: The Cope’s Gray Treefrog occurs in southeastern and northeastern South Dakota. Anecdotal evidence suggest that this species may be found in additional localities along the eastern border of South Dakota. An introduced population near Oahe Dam outside of Pierre has been reported as well as in the Black Hills, but surveys are needed to better understand if populations are established in these areas.

Remarks: Previously, the Gray Treefrog (Hyla versicolor) was also reported from South Dakota. These two species are identical in appearance and there are two main differences between these species. The Cope’s Gray Treefrog has two sets of chromosomes (diploid) and has a harsher, higher pitched call. The Gray Treefrog has four sets of chromosomes (tetraploid) and a slower, lower pitched, more melodic trill. Uncertainty has surrounded whether both species actually occur in the state, but multiple lines of evidence suggest that only Cope’s Gray Treefrogs occur in the state. 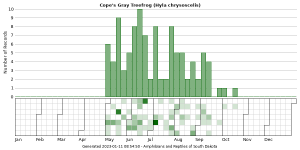 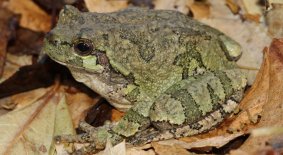