Description: The Milksnake is a slender, medium-sized snake, with adults ranging from 24–36 inches (61–91 cm) in length. The coloration of this species is variable across its broad range. In South Dakota, the background coloration of individuals is typically white or light gray, with large red saddles bordered in black running the length of the body. These large dorsal saddles rarely extend onto the underside of individuals. Juvenile coloration is similar to adults. Scales on this species are smooth (unkeeled), and the anal scale is not divided. This is the only species of snake in South Dakota with large red bands and should not be confused with any other species. Milksnakes are considered harmless mimics of venomous coralsnakes (Micrurus spp.); however, coralsnakes do not occur in South Dakota or any neighboring state.

Habitat: Given the large distribution of Milksnakes, individuals can be found in a variety of habitats, including prairies and deciduous forests. In South Dakota, Milksnakes are primarily found in grasslands with rocky outcrops or rocky cover.

Natural History: Milksnakes are active from April to October, before returning to overwintering locations, which are typically mammal burrows or rocky crevices. These secretive snakes usually seek shelter or warmth beneath objects, such as rocks or wood, rather than basking in the sun. Milksnakes consume a wide range of prey items, including mammals, lizards, and other snakes. Large prey items will often be constricted, but smaller prey is often not. The flashy coloration of Milksnakes is a form of mimicry that can imitate venomous coralsnakes (which do not occur in South Dakota). When agitated, Milksnakes will coil up and vibrate their tail, and if they continue to be provoked, will strike. If picked up, Milksnakes will often bite and release a foul-smelling musk in an attempt to be released. Mating often takes place in spring and early summer. During copulation, a male often bites the neck of a female and wraps their tails together, aligning his cloaca with hers. Females lay 8–12 eggs in decomposing organic material one or two months after copulation. Eggs typically hatch two months later, with hatchlings 6–10 inches (15–25 cm) in length.

Species Distribution: This species can be found across much of the eastern and central United States, north into southern Canada and south through Central America and into South America. Scattered, isolated populations exist along the western border of this species in the Rocky Mountains and the southwestern United States.

Remarks: Milksnakes are widespread species, and individuals vary greatly in their appearance across this broad range. A previous study split Milksnakes into seven different species and considered the species that occurs in South Dakota to be the Western Milksnake (Lampropeltis gentilis); however, these changes are not widely accepted. The common name is derived from folklore, when these snakes were thought to enter barns and drink milk from cows. Due to their bright coloration, Milksnakes are often found in the pet trade and sometimes collected illegally from the wild. 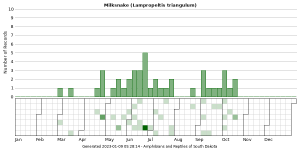 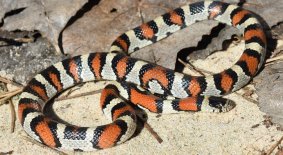 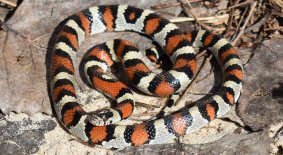