Description: This is a large, fully aquatic salamander with adults averaging almost 12 inches (30 cm) total length. Adults and juveniles possess external gills along the sides of the head. Gills vary in size depending on environmental conditions, particularly the amount of dissolved oxygen present in the water. In cold waters with high dissolved oxygen content, gills are often small and reduced. Unlike tiger salamanders that eventually lose their external gills and undergo metamorphosis to become terrestrial adults, the Mudpuppy remains fully aquatic. A dark stripe extends through the eye to the gills. Adults have dorsal patterning consisting of mottled black spots on a gray or tan background. Juveniles have a dark band down the length of the body which is bordered by a light-yellow stripe on either side and an additional dark stripe down each side, from the gills to the tip of the tail. The underside is light and may have slight mottling. The tail is laterally compressed and there are four digits on the hands and feet. During the breeding season, males differ from females by having a swollen, crescent-shaped ridge in front of the cloaca. Diagnostic characters include the presence of external gills and hind limbs with four digits (Eastern Tiger Salamanders and Western Tiger Salamanders have five digits on their hind limbs).

Natural History: Individuals are most active at night, although they can occasionally be seen during the day traveling through highly vegetated or muddy water. The Mudpuppy is active year-round, with bouts of inactivity while they rest beneath submerged logs or rocks, and they are known to consume a variety of aquatic prey, including fish, fish eggs, invertebrates, crustaceans, and other amphibians. Mudpuppies become sexually mature at 4–6 years old and breed in the fall. Eggs are fertilized internally, like most other salamanders. The female releases 75–100 fertilized eggs into the water between April and June of the following year. Eggs are usually released beneath submerged structures that provide a surface for egg attachment. After depositing the eggs, the female guards them until they hatch 5–7 weeks later.

Species Distribution: This species is found across a large region of North America west of the Appalachian Mountains, through the Great Lakes region, and as far west as eastern North Dakota and Oklahoma.

South Dakota Distribution: This species has been reported from the northeast corner of South Dakota in Day, Marshall, and Roberts counties. Observations of this species have been reported in the 1920s from Waubay Lake and Big Stone Lake and in 1972 from Buffalo Lakes, however there is only a single verifiable occurrence of this species from Big Stone Lake (Roberts County) in 1984. It is unclear if the records from Day and Marshall counties are of a Mudpuppy or were misidentified larval tiger salamanders.

Remarks: Anglers often catch this species in nearby states, and they are known to put up a great fight. Some people consider the Mudpuppy to be dangerous and toxic, but they are harmless. If you accidentally catch a Mudpuppy while fishing, carefully remove the hook and release the individual back in the water unharmed. This species is often misidentified as a juvenile tiger salamander (also confusingly called “mudpuppies” or “waterdogs”) due to the presence of external gills; however, the Mudpuppy only has four digits on the feet while both species of tiger salamanders have five digits on the hind feet. 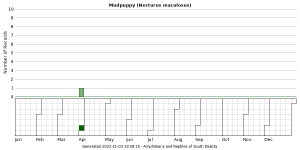 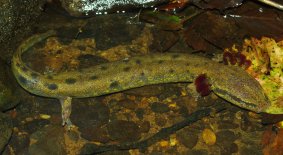