Description: The Common Watersnake is a moderately-long, robust snake, with adults ranging from 27–42 inches (69–107 cm) in length. The background coloration is dark brown or gray, and individuals often have a series of black or reddish-brown colored markings running down the length of the entire body. Towards the head, these markings form bands, but at the midbody and towards the tail, these markings separate and form alternating dorsal and lateral blotches. As juveniles, this patterning is present, though the background coloration and blotches may be lighter in appearance. Patterning often fades in older individuals. Scales on this species are heavily keeled, giving individuals a rough texture, and the anal scale is divided. The underside is often heavily patterned with copper or red-orange colored crescent-shaped markings outlined in black. These markings are highly variable among individuals.

Habitat: The Common Watersnake can primarily be found in close association with permanent ponds, lakes, and streams, though they can be found in temporary aquatic habitats (i.e., flooded fields) as well.

Natural History: Common Watersnakes are primarily nocturnal but can spend large parts of the day basking along shorelines or in vegetation overhanging the water. When threatened, individuals often flee basking areas and dive into the water. This species is a generalist predator, though individuals primarily consume fish and amphibians. Upon capture, this species is likely to bite and release a foul-smelling musk. Additionally, individuals will flatten themselves to appear larger when threatened. The Common Watersnake is generally active from April to October. They often overwinter in crevices or holes in hillsides and in crayfish burrows in lowland areas. Mating takes place in late April once individuals have emerged from hibernation. Males locate females via scent and will pursue them in an attempt to mate with them. Like gartersnakes, multiple males may attempt to court a single female, and large aggregations may form. A male will rub a female along her neck and move his body to stimulate the female to mate. If successful, the pair will wrap their tails around each other and copulate. Three to four months after successful copulation, females give birth to 20–25 live young. Young are born within a thin, transparent membrane and quickly begin to disperse away from the female.

Species Distribution: This species can be found across much of the eastern United States and into southern Canada, the Great Lakes Region, and along the Mississippi River to its confluence with the Gulf of Mexico.

South Dakota Distribution: The Common Watersnake is one of South Dakota’s rarest snakes and has only been found in a small area near Springfield, South Dakota, and the Niobrara Delta along the Missouri River (upper Lewis and Clark Lake). 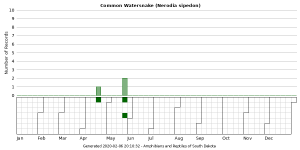 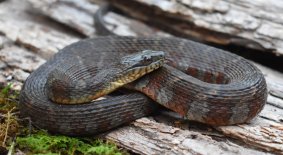 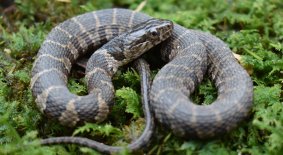