Description: The Smooth Greensnake is a small terrestrial snake, with adults ranging from 12–20 inches (30–51 cm) in length. These snakes are solid bright green in coloration and have a solid white or light-yellow underside. Juveniles are similar in appearance to adults. Scales are non-keeled, giving individuals a smooth, shiny appearance, and the anal scale is divided. Individuals have a bright red tongue that is tipped with black. Smooth Greensnakes should not be confused with any other South Dakota snake species, as no other snakes are solid green in coloration. Adult North American Racers are olive green with a light-yellow underside but are significantly larger than Smooth Greensnakes. At similar sizes, juvenile North American Racers are patterned, whereas Smooth Greensnakes are unpatterned.

Habitat: Smooth Greensnakes can be found in moist grassy areas in wet meadows, prairies, and woodlands but have also been found in residential and suburban areas.

Natural History: Smooth Greensnakes are typically active in the day from April to September and possibly into October provided warmer temperatures. Like many other snakes, Smooth Greensnakes are solitary in behavior and will seek shelter beneath objects like rocks or logs. Individuals can be found close together while overwintering in den sites and when males seek out females during the reproductive season. These snakes rarely strike but may open their mouth and gape when they feel threatened. Smooth Greensnakes feed primarily on small invertebrates and earthworms and do not constrict their prey. Individuals often overwinter in invertebrate or mammal burrows. Smooth Greensnakes breed shortly after emerging from hibernacula in the spring, and females will lay 3–11 eggs in late July or August. Nests are typically constructed in organic material, such as decaying logs. Females retain eggs in their bodies for longer periods of time compared to many other snakes; therefore, once eggs are laid, they typically hatch within a month.

Remarks: Upon death, the color of Smooth Greensnakes changes from green to blue. Yellow and blue pigments in the skin make individuals appear green. After an individual has died, the yellow pigments break down quickly, resulting in only blue pigments remaining. 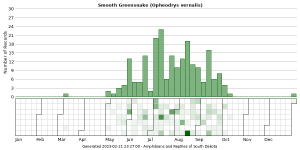 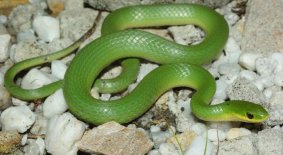