Habitat: Western Foxsnakes can be found in many different habitats across its range, including agricultural fields, farms, grasslands, and riparian woodlands. This species is often found in barns or other agricultural areas where there are abundant cover objects and numerous prey items.

Natural History: Western Foxsnakes feed primarily on rodents, birds, and eggs. Large prey items are often constricted, but smaller prey usually is not. Western Foxsnakes are frequently encountered on farms where they primarily consume rodents that are damaging crops and equipment, and as such, are a beneficial species to have present. When disturbed, Western Foxsnakes will often rattle their tail. This process does not produce sound, but if the tail is near dry leaves, sticks, or other items, it can produce a sound like that of a rattlesnake. Like many snakes, this species is likely to bite if handled and will release a foul-smelling musk if captured, but Western Foxsnakes are not harmful to people. Western Foxsnakes overwinter beneath the frost line in underground burrows. Mating often takes place in late April after individuals have emerged from hibernation. Males will pursue a female until she becomes receptive to mating. Once receptive, they will wrap their tails together and copulation occurs. Females then lay up to 20 eggs in nests in decaying organic material. Eggs typically hatch two or three months later, and hatchlings are 8–12 inches (20–30 cm) in length.

Species Distribution: This species can be found across much of the upper Midwestern states, including northern Illinois and Indiana, west to northeastern Nebraska, and north through southern Minnesota, Wisconsin, and the Upper Peninsula of Michigan. 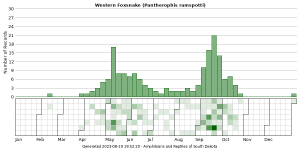