Description: Adult Greater Short-horned Lizards range from 3–4 inches (8–10 cm) in length. The body is broad, rounded and flattened, and the limbs are short. The tail is short and less than one-third of the total length. Small spines cover the body and sides, and a row of short, stubby horns occurs along the back and side of the head. Most other species of horned lizards have large, conspicuous spines along the head. Greater Short-horned Lizards are variable in color and patterning but generally are gray or brown with small flecks of white or orange interspersed. Six to eight larger dark blotches are often present on the back. The underside is typically white with some black mottling with flat, plate-like scales. Scales on the back consist of enlarged, keeled scales interspersed with small, bumpy, granular scales.

Habitat: These lizards can be found in a variety of habitats including shortgrass prairies, sagebrush, and open forests. Rocky or sandy areas with sparse vegetation are typically preferred over areas with dense vegetation. Loose soils are considered necessary for thermoregulation.

Natural History: These ground-dwelling lizards are often highly sessile, sit-and-wait predators that feed almost exclusively on ants but also on other arthropods. Individuals are primarily active during the day and seek shelter under vegetation or bury themselves under a thin layer of substrate during the hottest part of the day. The cryptic coloration of individuals makes them difficult to locate when they are not moving. When approached, individuals may either stay still or sprint a short distance, usually to the cover of vegetation, and freeze. When further threatened, they can avoid being consumed by predators by inflating the body to make them appear larger. Spines covering the body may also prevent them from being consumed by some predators, but Greater Short-horned Lizards have been recorded as prey for several species of snakes, including Prairie Rattlesnakes. Additionally, Greater Short-horned Lizards possess the ability to shoot blood from the ocular sinus (next to the eye) to deter predators such as coyotes, foxes, and dogs. Individuals overwinter in underground burrows. Little is known about reproduction in this species. Mating usually occurs after emergence from hibernation in May. Female lizards are viviparous and give birth to 5–7 young in late July. Juveniles are approximately 1 inch (3 cm) long and weigh less than 1 ounce (1 g) at birth.

Species Distribution: This species is found from Alberta, Canada south along the Rocky Mountains to New Mexico and Arizona, and into central Mexico.

South Dakota Distribution: This species is found in the foothills and grasslands surrounding the Black Hills and in and around the buttes in northwestern South Dakota. This species is often difficult to detect and may be more abundant than suggested by the limited number of records in the state.

Remarks: The species is named after Francisco Hernández Médico, an early naturalist and physician from Spain who wrote an early account on this species. Greater Short-horned Lizards were considered common in Harding County in the 1920s, but little recent information is available on the status in the state. 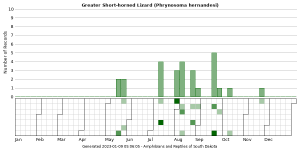 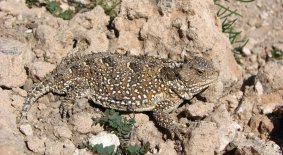 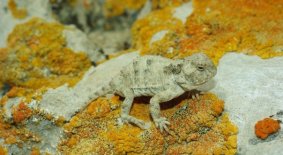