Description: The Gophersnake (also frequently called a Bullsnake) is South Dakota’s largest snake species. Adults of this large, heavy-bodied snake range from 36–72 inches (91–183 cm) in length. The background coloration is tan or light yellow with a pronounced patterning of brown, reddish-brown, or black blotches running down the back along the length of the body. Additionally, smaller dark blotches run along the sides, alternating the dark dorsal blotches. This patterning is variable along the length of the body. The large dorsal blotches are interspersed with numerous small flecks of dark coloration along the upper two-thirds of the body, with these small flecks fading away along the tail and lower one-third of the body. The underside is off white or light yellow and covered in black markings. Vertical black bars are present along the upper lip and a black stripe runs between and through the eyes and extends to the corner of the mouth. Gophersnakes have an enlarged, triangle-shaped rostral scale at the tip of the snout. Scales on this species are heavily keeled, giving individuals a rough texture, and the anal scale is not divided. Juvenile coloration is similar to adult coloration. Gophersnakes may be confused with Western Foxsnakes but can be differentiated by their variable patterning running the length of the body (Western Foxsnakes have uniform patterning along the length of the body) and by the presence of large vertical black bars on the upper lip (Western Foxsnakes lack black bars on the upper lip).

Habitat: Gophersnakes can be found in a variety of habitats, including grasslands, riparian woodlands, agricultural fields, and farms. This species can be found in close association with farms and ranches where there are abundant cover objects and numerous prey items.

Natural History: Gophersnakes feed primarily on rodents, birds, and eggs; large prey items are often constricted. When disturbed, Gophersnakes will often vibrate their tail. This process does not produce sound, but if the tail is next to dry leaves, sticks, or other items, it can produce a sound like that of a rattlesnake. This species also produces loud hissing sounds created when individuals exhale air across a membrane in the back of the mouth. Like many snakes, Gophersnakes are likely to bite and release a foul-smelling musk if captured. They are typically active from May to September and primarily nocturnal during the summer months. During warm periods, individuals seek shelter in burrows, dense vegetation, or under discarded debris. Individuals overwinter in mammal burrows below the frost line. Mating often takes place in early May after individuals have emerged from hibernation. Females then lay up to 24 eggs (average of 13) in nests constructed in sandy soils or in decaying organic material. Eggs typically hatch two months later to juveniles that are large enough to begin eating small rodents.

Species Distribution: This species can be found across much of the central and western United States, including southern Canada and northern Mexico.

Remarks: This non-venomous species is commonly called a Bullsnake. They are often found on farms where they consume rodents that can damage crops and property, making their presence beneficial to people. 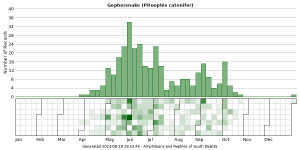 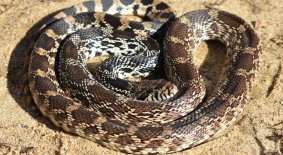