Description: The Prairie Skink is a medium-sized lizard ranging from 4–8 inches (10–20 cm) in total length, though they may be shorter due to incomplete or regenerated tails. For individuals with a complete tail, the tail length is more than half of the total length. The overall body coloration of the Prairie Skink is tan, and multiple black stripes run the length of the body. Two large, bold black stripes, separated by a thin white stripe, are positioned dorsolaterally on the body. The back has two thin (sometimes faint) black stripes running down the body, fading out toward the tail tip. The underside is pale cream in coloration. Like other skinks, Prairie Skinks have smooth, shiny scales, limbs that are small and thin, tubular bodies, and distinct ear openings. During the breeding season, males have orange coloration on their chins. Newly hatched individuals are often solid black with a bright blue tail. This conspicuously colored tail serves as a lure to direct predatory attacks away from the body, allowing individuals to escape. As individuals age, the black coloration fades to tan, stripes begin to appear, and the blue tail color fades away. The Prairie Skink is similar in appearance to the Many-lined Skink but can be differentiated by the presence of the two bold black dorsolateral stripes (these are absent in the Many-lined Skink).

Habitat: Prairie Skinks typically inhabit grasslands where individuals can be found under cover objects, including rocks, logs, and human debris. Additionally, they can be found in forested habitats along rivers. Soils where they occur are typically sandy and loose to accommodate digging behaviors.

Natural History: Prairie Skinks are insectivorous, consuming a wide variety of insects and arthropods. Individuals are secretive. They often spend a majority of time in burrows or under cover objects and are rarely seen out in the open. When disturbed, Prairie Skinks quickly dart to shelter, swiftly moving through vegetation. They can drop their tail to escape predators. A dropped tail can continue to wiggle for several minutes, drawing a predator’s attention while the skink escapes. Regenerated tails are a slightly different color and usually shorter than the original tail. Prairie Skinks overwinter underground in burrows below the frost line at depths up to 4.5 feet (1.4 m). Prairie skinks become active in early May and breed soon thereafter. The male mounts and copulates with a female. She digs a shallow nest in loose, moist soils near or within shelter, and lays 5–13 (average of 9) eggs in late June or early July. She then guards and protects her eggs until they hatch two months later. Individuals reach sexual maturity at two years of age.

Species Distribution: This species occurs throughout much of the Great Plains, from Texas north through North Dakota and Minnesota.

Remarks: This species can be locally abundant in suitable habitat with abundant cover objects. Frequently, the Prairie Skink is found in close association with homes or farms and can be found under boards or other discarded debris. 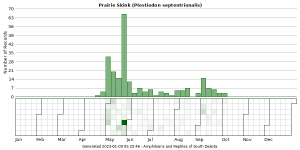 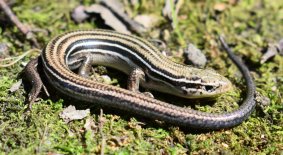 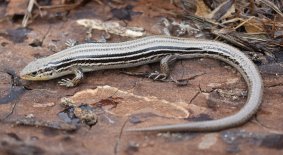