Adult Description: The Boreal Chorus Frog is a small frog that averages just over 1 inch (2.5 cm) in length. Dorsal coloration can be varying shades of tan or brown and typically there are three dark stripes running down the back. It is not uncommon to find individuals with stripes that are broken, often resulting in a row of blotches that occur in a line. Additionally, a dark stripe occurs through the eyes and along the lateral sides of the body and a white stripe appears along the upper lip. Ventral coloration is typically white. Because this species is primarily arboreal, webbing between the toes is diminished and a small circular toe pad is present on the tips of toes. Adult males can be distinguished from females by the presence of a dark colored throat (females have a light-colored throat), though this may fade outside of the breeding season.

Call Description: The Boreal Chorus Frog can have a remarkably loud call given their small size. The breeding call is a series of metallic clicks that rise in pitch, often compared to the sound of running fingers along the teeth of a rigid comb.

Habitat: Because of their statewide distribution, Boreal Chorus Frogs can be found in almost any wet area, from temporary roadside ditches to large, permanent wetlands and river backwaters. Outside of breeding season, this species can be difficult to detect as adults move to upland habitats.

Natural History: Boreal Chorus Frogs are common throughout South Dakota but are rarely observed outside of the breeding season. Like most frogs, this species is primarily nocturnal; however, breeding males may continue to call throughout the day. Boreal Chorus Frogs consume a wide variety of invertebrates. During the winter, individuals bury into leaf litter and organic material. Because these areas will still reach freezing temperatures, the Boreal Chorus Frog has the capacity to tolerate portions of their body freezing solid. Glucose is produced by the liver and accumulates in the cells preventing damaging from ice crystals. As spring temperatures warm, individuals thaw, and adults move to wetland habitats to reproduce. Boreal Chorus Frogs are one of the earliest breeding frogs in South Dakota (along with Wood Frogs) and as such, ice and snow may still be present at sites. Breeding activity begins as early as March and continues into late May. Calling has even been heard as late as October in South Dakota, though it is unclear is this has resulted in successful reproduction. Females lay up to 1,500 eggs in a series of small masses attached to submerged vegetation. Eggs quickly hatch (often before other species begin to breed) and tadpoles complete metamorphosis often by late June.

Species Distribution: This species has a large range across most of the central United States, north into Canada (Saskatchewan, Alberta, Manitoba, and Québec), east into the Great Lakes region, south to parts of New Mexico and Arizona, and west into much of the Rocky Mountains.

South Dakota Distribution: The Boreal Chorus Frog can be found statewide, though records are lacking from north-central South Dakota.

Remarks: The Boreal Chorus Frog was previously considered a subspecies of the Western Chorus Frog (Pseudacris triseriata) but was elevated to full species due to differences in morphology and call characteristics. 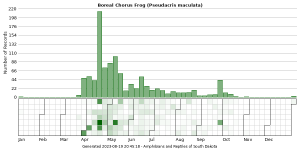 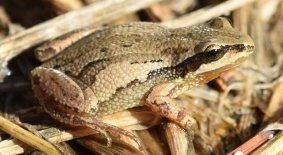