Adult Description: The Plains Leopard Frog is similar in appearance to the Northern Leopard Frog. Adults often measure from between 2–4 inches (5–10 cm) in length and have a background color that is usually tan with numerous conspicuous large dark blotches. A prominent white dorsolateral fold runs from the eye down to the hind legs and is broken near the posterior end. Where the line is broken, it is then inset medially (more towards the midline of the individual) and continues a bit farther. The ventral coloration is solid white. There is a large tympanum posterior to the eye that usually has a white spot in the middle. Adult males have an enlarged first digit on their forelimbs that is used to help grasp females when they are breeding. Plains Leopard Frogs can easily be differentiated from Northern Leopard Frogs by the presence of broken dorsolateral folds (Northern Leopard Frogs have unbroken dorsolateral folds).

Larval Description: Tadpoles are usually greenish to brownish in coloration with few, faint dark markings. These tadpoles are robust in size, reaching lengths of 2 inches (5 cm). The intestinal coil is visible through the underside. Tadpoles of this species are difficult to discern from Northern Leopard Frog tadpoles but can be easily differentiated from American Bullfrog tadpoles, which have a mottled underside and are covered in small black marks.

Call Description: Male Plains Leopard Frogs have a call that consists of 2–4 throaty, clucking notes, that sound like “chuck-chuck-chuck”, repeated several times in rapid succession. Each note in this series rises slightly in pitch and ends in an accent.

Habitat: Plains Leopard Frogs can be found in most aquatic habitats that occur in their range, including dugout ponds and backwaters of large rivers. Individuals are primarily found at these aquatic sites, but during wet, humid nights individuals can disperse into upland grassland and forested habitats.

Natural History: Adults are primarily nocturnal and will consume a wide variety of invertebrates. During the day, individuals are often found along the shore in vegetation. When startled, individuals will jump into the water and often remain submerged for several minutes. During winter months, adults and juveniles bury into mud at the bottoms of deep aquatic habitats to avoid freezing. Plains Leopard frogs primarily breed in June in South Dakota, but reproduction has been observed as late as September. This call lacks the long, rattling snore that is part of the Northern Leopard Frog’s call. Females can lay up to 6,500 eggs in large clumps often attached to vegetation. Tadpoles typically undergo metamorphosis in late July and August.

Species Distribution: Plains Leopard Frogs are distributed throughout much of the Great Plains and into the central Midwest. They occur from southeast South Dakota east through Iowa and Illinois to Indiana and south into Texas and New Mexico.

South Dakota Distribution: The Plains Leopard Frog is restricted to the southeastern and south-central regions of the state, often along the Missouri River and associated drainages. Additionally, individuals have suggested that Plains Leopard Frogs may occur further west in the state, but verifiable records are lacking.

Remarks: The species is named after W. Frank Blair, a zoologist at the University of Texas at Austin. All leopard frogs were considered the same species until the 1970s, after which four species were recognized, including the two species recognized in South Dakota: the Plains Leopard Frog (Rana blairi) and the Northern Leopard Frog (Rana pipiens). 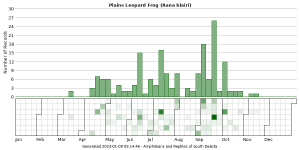 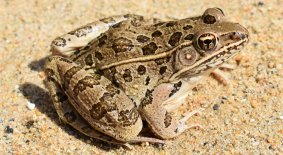 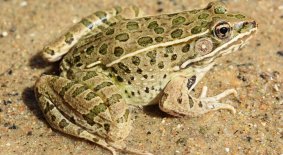