Adult Description: The American Bullfrog is the largest frog species found in South Dakota and the United States. Adults often measure from 4–6 inches (10–15 cm) in length but may exceed this size. Adult American Bullfrogs are usually an olive-green color, with occasional black mottling and bars on the thighs. A small dorsolateral fold starts behind the eyes and curves above and around a large, conspicuous tympanum. The underside is white with sporadic gray mottling. Adult males will often be darker than females and can develop a yellow throat during the breeding season. Adult males also have a larger tympanum and enlarged first digits on their forelimbs that are used to help grasp females when they are breeding.

Larval Description: Tadpoles are usually a greenish or brown color with distinct small black spots. The ventral surface is usually white, with a reticulated patterning of light grayish brown and the eyes on tadpoles are dorsally positioned. Tadpoles can grow to be quite large and are commonly found around 4 inches (10 cm) in length. Larvae are slow to develop, but during metamorphosis morphological changes are rapid.

Habitat: Large adult American Bullfrogs are highly aquatic and are generally found at large, permanent bodies of water such as large, deep lakes, reservoirs, and backwaters of large rivers. Smaller individuals and juveniles can be found along smaller wetlands, but typically remain in close proximity to larger bodies of water. Because larvae take multiple years to complete metamorphosis, tadpoles need deep, permanent bodies of water that do not freeze or dry up.

Natural History: Adult males are territorial and can be aggressive in defending their territory. This species is primarily active at night and a generalist predator that consumes a wide range of prey, including invertebrates, snakes, small mammals, and even birds. Unlike most other tadpoles, American Bullfrog tadpoles can secrete toxins from their skin that makes them distasteful, and as such, can be found in habitats where fish are abundant. During winter months, adults and juveniles bury into mud at the bottoms of deep aquatic habitats to avoid freezing. When startled, this species often emits a high-pitched squeak as it jumps into the water. This species is considered a late breeder in South Dakota, usually breeding from June to July. Male American Bullfrogs often call on warn summer nights. Females lay up to 20,000 eggs on the surface of a body of water and the eggs hatch in four to five days. Tadpoles are slow growing and take multiple years before metamorphosing into terrestrial juveniles.

Species Distribution: American Bullfrogs are native to the much of the eastern and central regions of the United States. This species has been introduced in western states and across the globe often due to commercialization and the food trade.

South Dakota Distribution: The American Bullfrog is restricted to southern South Dakota. This species has been widely introduced across the United States and these introductions have made it difficult to determine the true, historic range of this species. 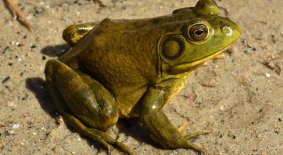