Larval Description: Tadpoles are usually greenish to brownish in coloration with few, faint dark markings. These tadpoles are robust in size, reaching lengths of 2 inches (5 cm). The intestinal coil is visible through the venter. Tadpoles of this species are difficult to discern from Plains Leopard Frog tadpoles but can be easily differentiated from American Bullfrog tadpoles, which have a mottled venter and are covered in small black marks.

Call Description: Male Northern Leopard Frogs have a call that consists of a drawn-out rattling snore that lasts three or more seconds followed by several grunts or chuckles. The call often starts off soft then grows louder.

Habitat: Northern Leopard Frogs can be found at most aquatic habitats that occur in their range, including dugout ponds, wetlands, reservoirs, and oxbow lakes. Individuals are primarily found at these aquatic sites, but during wet, humid nights individuals can disperse into upland habitats.

Natural History: Adults are primarily nocturnal and will consume a wide variety of invertebrates. During the day, individuals are often found along the shore in vegetation. When startled, individuals will jump into the water and often remain submerged for several minutes. During winter months, adults and juveniles bury into the mud at the bottom of deep aquatic habitats to avoid freezing. Northern Leopard Frogs primarily breed from mid-May through June in South Dakota. Often in mixed species choruses, calls from other species such as the Boreal Chorus Frog make it difficult to hear the softer calls of the Northern Leopard Frog. Females lay up to 6,000 eggs in several large clumps often attached to vegetation. Eggs hatch in 14 days and tadpoles typically undergo metamorphosis in late July and August.

Species Distribution: Northern Leopard Frogs have a large distribution across much of the northern United States and Canada, including New England and the Great Lakes region, the upper Midwest, and the Rocky Mountains south to New Mexico.

South Dakota Distribution: The Northern Leopard Frog can be found throughout South Dakota. 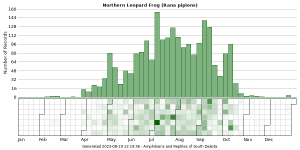 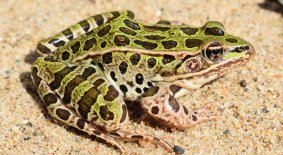