Adult Description: The Wood Frog is a small species of frog that reaches maximum sizes from 2–3 inches (5–8 cm) in length. The background coloration is typically tan to light brown and can have hues of reddish-brown or black and a faint pale middorsal stripe is present. Two prominent dark patches, one over each eye, are present and extend through the tympanum. Two dorsolateral ridges are present and can be tan, brown, or rust colored. A white stripe occurs along the upper lip that ends near the forelimb and faint dark stripes can be visible on the upper thigh. Ventral coloration is white. Adult males have an enlarged first digit on their forelimbs that is used to help grasp females when they are breeding and are usually smaller than adult females.

Larval Description: Tadpoles are usually brown in body coloration, with clear tail fins that end in a sharp point. The dorsum is light and a light line in present along the edge of the mouth.

Call Description: Male Wood Frogs have a call that is a soft, duck-like cackling, that is often in a rolling series.

Habitat: Wood Frogs are often associated with vernal pools in deciduous forests across most of their range. In South Dakota, they can be found in prairie wetlands and coulees, often away from deciduous forests or riparian corridors.

Natural History: Adults are primarily active at night and will consume a wide variety of invertebrates. These frogs generally have a small home range and can be found foraging or resting under logs, leaves, and rocks. Wood Frogs overwinter under only a couple inches of organic material or leaf litter. Because these habitats reach sub-freezing temperatures, the Wood Frog has a remarkable ability to survive by producing large amounts of glucose, which minimizes the damaging effects of freezing and dehydration. As spring temperatures warm, individuals thaw, and adults move to wetland habitats to reproduce. Wood Frogs are early breeders similar to Boreal Chorus Frogs, however, adults only breed over a relatively short period in South Dakota, typically from late March to early April. Ice and snow may still be present at sites during reproduction. Females will lay up to 1,000 eggs in large clumps that are frequently attached to vegetation. Eggs hatch in three weeks and tadpoles typically mature in 6–9 weeks. After reproducing, adults often move away from breeding wetlands to upland habitats.

Species Distribution: This species can be found throughout most of New England, across the northern Midwest and farther north into Canada. Wood Frogs range up into the Arctic Circle and are the northernmost species of frog in North America.

South Dakota Distribution: The Wood Frog can only be found in northeastern South Dakota.

Remarks: Previously, the Wood Frog was presumed to be extirpated from South Dakota until it was rediscovered in 1997 in Roberts County. Since then, numerous records have expanded their range from the northeastern corner of Roberts County into Deuel County and onto the Prairie Coteau. The exact reasons for this recent expansion of Wood Frogs remains unknown. Wood Frogs are adapted to breed in pools filled by spring rains and snowmelt, exposing them to a variety of acidic, low pH environments. 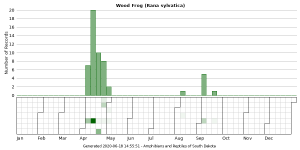 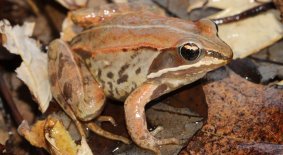 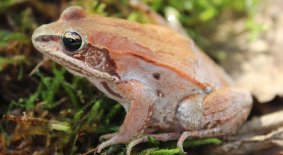