Description: Adult Common Sagebrush Lizards are small, ranging from 4–6 inches (10–15 cm) in total length, with the tail making up more than half the total length. The background color is light brown or light gray, and individuals have a wide, light gray dorsal stripe. A light tan dorsolateral stripe runs from the neck to the base of the tail and is typically bordered by a darker gray or brown stripe with faint black or white markings. Common Sagebrush Lizards also have small, irregular dark markings that run down the back and an irregular dark spot on each shoulder. Scales on the Common Sagebrush Lizard are small, keeled, and overlapping, giving it a rough, spiny appearance and texture. The Common Sagebrush Lizard is similar in appearance to the Prairie Lizard but can be differentiated by the presence of small, non-keeled, non-overlapping scales on the thigh, posterior to the femoral pores and the presence of two black stripes separated by a light stripe (Prairie Lizards have keeled, overlapping scales and lack these stripes on the back of the thigh). Males are easily differentiated from females by having two bright blue patches on their underside that females lack. Instead, adult females will have faint blue undersides and rust colored sides. Both sexes have a row of femoral pores on the underside of each thigh. These pores are enlarged in adult males. Juveniles are similar in appearance to adults, but juvenile males lack these blue patches, which they acquire with sexual maturity.

Habitat: This species can be found in dry, rocky areas with sparse vegetation and woody debris and branches. Generally considered terrestrial, though they are proficient climbers and frequently found on rock outcrops or other vertical surfaces.

Natural History: The Common Sagebrush Lizard is diurnal, basking in the sun on rocks, logs, or other areas near shelter. Males are territorial and will display bright blue patches on their undersides, head bob, and do push-ups to ward off rival males. Common Sagebrush Lizards are insectivores, feeding on most terrestrial invertebrates and arthropods. They are extremely fast and when startled will often seek refuge in nearby vegetation or crevices. Like the Prairie Lizard and skinks, the Common Sagebrush Lizard can drop its tail to escape predators. The tail can be regenerated, although regenerated tails are a slightly different color and usually shorter than the original tail. Common Sagebrush Lizards overwinter underground in burrows. Mating typically takes place in May as temperatures begin to warm. Males court females by bobbing their heads and extending up on their limbs to show off bright blue patches on their undersides. Females can lay 2–10 eggs potentially up to twice each season. Eggs hatch approximately two months later. Females demonstrate no parental care, unlike that observed in Many-lined Skinks and Prairie Skinks.

Species Distribution: This species occurs throughout much of the western United States and Rocky Mountains, from Washington to southern California, east through Idaho and Nevada to parts of New Mexico, Colorado, and Nebraska.

South Dakota Distribution: The distribution of the Common Sagebrush Lizard is poorly known in South Dakota. The only voucher specimens of this species are from the southern Black Hills. The species likely occurs in the western Black Hills, but verifiable records are lacking. 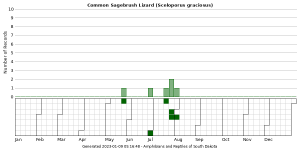 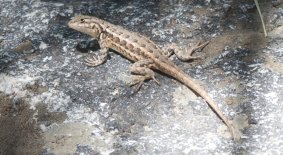