Adult Description: Adult Plains Spadefoot dorsal coloration ranges from tan to brown to olive gray with a series of irregular dark marks. Often, these dark marks will contain orange or red warts within them. The total length of adults is 2–4 inches (5–10 cm). The ventral side of adults is white and unmarked. Additionally, this species has a large raised bump (called a boss) between the eyes, large eyes with elliptical (vertical) pupils, and a dark, keratinized spade on the hind legs that are used for digging. Unlike the true toads (family Bufonidae), Plains Spadefoots lack a well-defined parotoid gland and their skin is smooth (rather than warty and rough). Adult males have nuptial pads (dark, keratinized pads) on the first and second digits of the forearms that are used to help grasp the female when they are breeding; females lack these pads.

Larval Description: Tadpoles are usually tan or gray with a faint mottling pattern. Larvae have rapid development and morphological changes are rapid. The vent is medial in these tadpoles (similar to true toads). Overall, the body is large and bulbous with the widest point being just behind the eyes. The tail fin is mostly clear, lacking pigmentation.

Call Description: The call is often described as a wail, snore-like bleat, or growl, sounding similar to a “waaah” or “waaac” that is repeated once every 1–2 seconds.

Habitat: Typically, Plains Spadefoots can be found in most grassland habitats in the state and are not typically associated with forests or woodlots. Breeding habitats where adults congregate are shallow, ephemeral bodies of water that collect in depressions in the landscape or in agricultural fields. Large, permanent ponds are not used by breeding adults.

Natural History: This is a highly fossorial species of frog and that is quite suited for life in arid environments. Plains Spadefoots are typically only found after heavy rains when they are out foraging or moving to and from breeding habitats. Like most amphibians, this is a nocturnal species of frog and consumes various invertebrates. When disturbed, Plains Spadefoots can secrete as noxious, distasteful skin secretion than can cause irritation to the eyes and sinuses. During and shortly after heavy rain events, adults emerge from burrows and proceed to ephemeral bodies of water to reproduce. As explosive breeders, large choruses of these frogs can be heard immediately after heavy rain events. Breeding activity is typically intense for one or two nights, then adults leave ponds to return to terrestrial habitats. Up to 2,000 eggs are typically laid in strands attached to vegetation and hatch within 2 days. Tadpoles typically undergo metamorphosis within two weeks of hatching.

Species Distribution: This species can be found across much of the Great Plains from Texas to southern Canada and west into the Rocky Mountains.

South Dakota Distribution: The Plains Spadefoot can be found across a most of western and southeastern South Dakota but appears to be absent from much of the northeast region of the state. Records are lacking for this species across much of northwestern South Dakota likely due to their fossorial habits.

Remarks: Contrary to popular belief, the Plains Spadefoot cannot transmit warts to humans by touching them, however, their skin secretions can be irritating and if they come in contact with your eyes and nose. 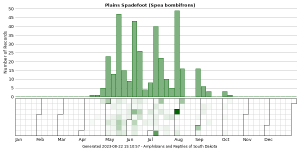 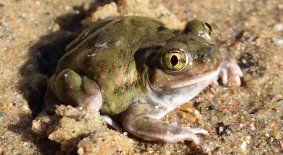