Description: The Dekay’s Brownsnake is a small terrestrial snake, with adults ranging from 10–12 inches (25–30 cm) in length. The background coloration is tan, brown, or reddish brown, typically with a pale middorsal stripe. This stripe may be bordered with black dots, though this is absent in some individuals. The top of the head is dark in coloration, and two dark blotches on the neck give the appearance of a collar. There is a dark spot beneath each eye. The underside is off white with no markings except for small black specks on the sides of the ventral scales. Juvenile coloration is similar to adult coloration, but individuals can be lighter, and a yellow ring may be present around the neck. Scales are keeled, and the anal scale is divided. Dekay’s Brownsnakes are similar in appearance to Red-bellied Snakes but can easily be differentiated by the presence of an off-white underside (Red-bellied Snakes have bright red undersides).

Natural History: Dekay’s Brownsnakes are active from April to September and may be active in October with warmer temperatures. Similar to most snakes, this species is solitary in behavior. Individuals may be close together while overwintering at den sites and when males seek out females during the reproductive season. Overwintering sites are typically rocky outcrops or small mammal burrows. During the active season, Dekay’s Brownsnakes spend much of their time hiding beneath objects, such as rocks, logs, or boards. Earthworms are the primary prey of Dekay’s Brownsnakes, though they may also eat slugs and other soft-bodied invertebrates. These docile snakes rarely bite. Instead, they flatten out their bodies to make themselves appear larger and can release a foul-smelling musk when threatened. Mating occurs in the early spring after emergence from overwintering sites. Males locate females through scent and will pursue the female until she becomes receptive to copulation. Dekay’s Brownsnakes are viviparous, giving birth to an average of 14 live young in the late summer, three or four months after copulation. Young are born within a thin, transparent membrane and quickly begin to disperse away from the mother. Sexual maturity is reached in two or three years.

Species Distribution: This species has a large distribution across much of the eastern half of the United States.

South Dakota Distribution: Only a single record of Dekay’s Brownsnake exists from near Big Stone Lake, Roberts County in northeastern South Dakota. Despite recent surveys across this region, no additional records have been reported, and it is likely that this species is extirpated from the state.

Remarks: This species is named after James Edward DeKay, a 19th century naturalist from New York. The one record of Dekay’s Brownsnake from South Dakota was collected in 1922. It is unclear if there was a historic population of this species in the area or if this individual represents an accidental introduction. 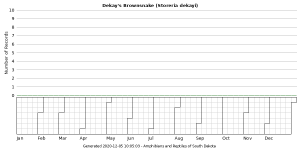 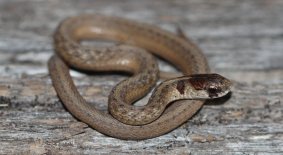 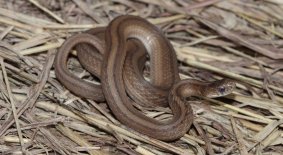