Description: The Red-bellied Snake is a small terrestrial snake, with adults ranging from 10–12 inches (25–30 cm) in length. The background coloration is variable and can be tan, brown, or gray, typically with a pale middorsal stripe. This stripe may be difficult to discern as it can match the background coloration in some individuals. Often, this middorsal stripe is bordered by a series of small black dots that may be connected, giving the appearance of thin stripes running down the length of the body. The head is dark in coloration, and three pale blotches (two lateral, one middorsal) are present on the neck. The underside is red in coloration and can vary in hue, from light red to deep red. Juvenile coloration is similar to adult coloration, but individuals can be darker, and a yellow ring may be present around the neck. Scales are keeled, and the anal scale is divided. Red-bellied Snakes are similar in appearance to Dekay's Brownsnake but can easily be differentiated by the presence of a red underside (Dekay's Brownsnakes have an off-white underside).

Natural History: Red-bellied Snakes are active from April to October, provided warm temperatures. Similar to most other snakes, this species is solitary in behavior. Individuals can be found in close proximity while they are overwintering at den sites and when males seek out females during the reproductive season. Individuals are often observed moving and crossing roads in the spring and fall as individuals leave and return to hibernacula. Red-bellied Snakes are secretive, spending most of their time hidden beneath objects such as rocks, logs, and debris piles, and within dense vegetation. Hibernacula are typically rocky outcrops or small mammal burrows, but individuals may also overwinter in old foundations, wells, and even ant mounds. Earthworms are the primary prey of Red-bellied Snakes, though other soft-bodied invertebrates may also be consumed. Individuals are docile and rarely bite. Instead, they flatten out their bodies to make themselves appear larger, curl their lips, and release a foul-smelling musk when threatened. Additionally, individuals have been reported to feign death and expose their red undersides. Mating is thought to occur in the early spring, as early as April, after emergence from overwintering sites, but individuals may also breed in the fall. Females may mate with multiple males and have the ability to store sperm. Red-bellied Snakes are viviparous, giving birth to 2–21 live young in the late summer, typically in August or September. Sexual maturity is reached in two or three years.

Species Distribution: This species has a large distribution across much of the eastern half of the United States, with populations in the Black Hills being the westernmost known locality of this species. 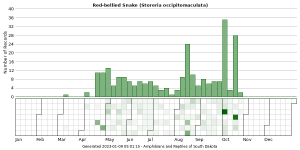 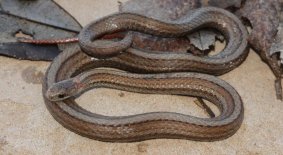 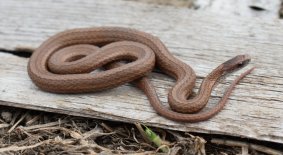