Description: The Ornate Box Turtle is a terrestrial turtle with a domed, strongly arched carapace that has a dark brown background color and is marked with yellow lines. These yellow lines radiate outward and downward from three points along each side of the midline of the carapace, and a yellow line runs down the middle of the carapace. The plastron is similar in appearance to the carapace and has a single hinge located just behind the front limbs, allowing the animal to withdraw its head and limbs into the shell. Adults have a carapace length that ranges from 4–6 inches (10–15 cm), with females typically slightly larger than males. Yellow marks are typically present on the neck and limbs, and reddish orange marks may appear on the large scales on the front limbs. Adult males and females can be easily discerned from one another: males have red eyes and females have brown or yellow eyes. It can easily be distinguished from other South Dakota turtles by the presence of the domed carapace covered with yellow streaks (Blanding’s Turtles have a domed carapace covered with yellow dots and a bright yellow throat and lower jaw).

Habitat: This terrestrial species can be found in grasslands and some agricultural lands throughout its range. Though not an aquatic turtle, it can also be found near wetlands and other aquatic habitats. These turtles spend much of their time in burrows, seeking refuge from intense mid-day heat. As active burrowers, these turtles tend to prefer terrestrial habitats with sandy soils that accommodate digging.

Natural History: Ornate Box Turtles are omnivorous, feeding on insects, worms, carrion, and plant material such as rose hips. These turtles are primarily active during the day and avoid the mid-day heat by seeking refuge in dense vegetation and in burrows. This species tends to be more active following warm, rainy weather. During winter months, turtles overwinter in deep burrows where they avoid freezing. When Ornate Box Turtles are disturbed or attacked by predators, they retract the head, limbs, and tail into the shell and close the front of the plastron. As a result, predators can typically only consume juveniles and hatchings. Road collisions are the primary cause of adult mortality. Mating typically takes place in May but may continue through the summer months, with females able to store sperm. Females dig nests in sandy soils and lay 2–8 eggs. Sex is determined by incubation temperature, with females resulting from temperatures above 29°C. Females reach sexual maturity in eight years, compared to about five years for males.

Species Distribution: This species occurs throughout much of the Great Plains, from South Dakota south through Texas and into Mexico. Additionally, it ranges east through Missouri and Illinois with several isolated peripheral populations.

South Dakota Distribution: This species occurs in the Sandhills and open grasslands of south-central and southwestern South Dakota. Numerous records of this species have been reported from the Buffalo Gap National Grasslands and Badlands National Park.

Remarks: Ornate Box Turtles are occasionally illegally collected as pets, typically as individuals are crossing roads. The Convention on International Trade in Endangered Species of Wild Fauna and Flora (CITES) currently regulates the trade of box turtles to eliminate or minimize the illegal pet trade and protect this turtle. Instead, any turtles observed crossing roads should be safely helped to the other side of the road (in the direction they were heading) and left in the wild. 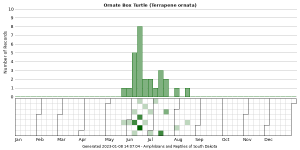 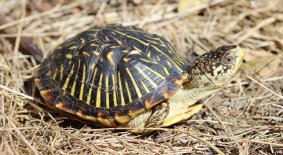 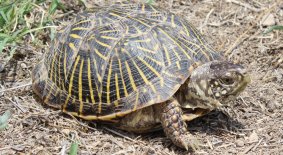