Description: The Terrestrial Gartersnake is a slender, medium-sized snake with adults ranging from 20–30 inches (51–76 cm) in total length. In South Dakota, individuals have a thin tan or pale yellow middorsal stripe extending down the entire length of the body. The background coloration is gray or olive, with an additional stripe on each side of the body on scale rows two and three. Patterning and coloration between the middorsal and lateral stripes can be variable but are generally a series of alternating black circular blotches. These black blotches extend onto the middorsal stripe, partially obscuring it. All individuals have keeled scales, an undivided anal scale, and black pigmented ventral scales. Additionally, a large black blotch is present at the back of the head that can extend onto the neck. The upper lip has faint vertical black bars. Terrestrial Gartersnakes can easily be differentiated from Plains Gartersnakes by having lateral stripes on scale rows two and three (Plains Gartersnakes have lateral stripes on scale rows three and four) and from Common Gartersnakes by the presence of black pigmentation on the ventral scales (Common Gartersnakes lack pigmentation on ventral scales).

Habitat: Terrestrial Gartersnakes are found in high elevation (>4500 ft) pine forests characteristic of the Rocky Mountains. Individuals are typically found in close proximity to aquatic habitats such as streams, reservoirs, and wetlands, though they have also been found far from water sources.

Natural History: Terrestrial Gartersnakes are typically active from March to October, but this can vary regionally depending on temperature. This is an active, primarily diurnal species of snake, although during the summer individuals become more nocturnal to avoid the heat of the day. Beginning in September these snakes move to overwintering hibernacula, which are often rock crevices, mammal burrows, artificial (human-made) cover such as under concrete or wood piles. On warm days from November to March, individuals may emerge from hibernacula to bask in the sun, though they will stay near the entrance. Prey consists mostly of amphibians, fish, earthworms, or other soft-bodied invertebrates; however, they are also known to consume small mammals and chicks of ground nesting birds. Terrestrial Gartersnakes do not constrict prey but instead subdue and rapidly consume prey. Upon capture, Terrestrial Gartersnakes will release a foul-smelling musk and may bite. Males of this species typically emerge from hibernacula before females in mid-April and will wait for females to emerge. Once a female emerges, multiple males will attempt to court her. Eventually, a male is successful in breeding, and the female will disperse from the hibernacula. Males will continue to stay at the hibernacula attempting to mate with females for several weeks. Females give live birth to an average of 20 young in the late summer. Sexual maturity is typically reached in two years.

Species Distribution: Terrestrial Gartersnakes are only found from the Rocky Mountains west to the California coast and north into southern Canada. Populations in the Black Hills of South Dakota represent the easternmost distribution of this species.

South Dakota Distribution: The Terrestrial Gartersnake is primarily found in the Black Hills. Populations have also been reported from buttes in Harding County in northwestern South Dakota, but verifiable records are lacking.

Remarks: Terrestrial Gartersnakes are widespread across the western North America, and individuals vary greatly in their appearance across this broad range. Gartersnakes are frequently called “gardener snakes.” 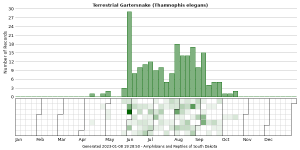 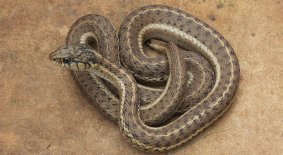