Description: The Plains Gartersnake is a slender, medium-sized snake. Adults range from 16–28 inches (41–71 cm) in total length. The coloration of Plains Gartersnakes can vary, but in South Dakota, individuals have a bright yellow or orange middorsal stripe extending down the entire length of the body. The background coloration is typically dark brown or black, with a light-yellow stripe on each side of the body on scale rows three and four. Patterning and coloration between the middorsal and lateral stripes are variable, even within a region, though there are two common forms: 1) a series of alternating black spots resulting in a checkerboard-like pattern on a light background, or 2) an almost solid black form where spots are almost indistinguishable from the background coloration. The head is dark, and the upper lip has black vertical lines. All individuals have keeled scales, an undivided anal scale, and white ventral scales with dark marks along the edges. Plains Gartersnakes are similar in appearance to Common Gartersnakes but can be identified by the lateral stripe on scale rows three and four (instead of scale rows two and three in Common Gartersnakes).

Natural History: Plains Gartersnakes are typically active from April to October, but this can vary regionally. This is an active, primarily diurnal species of snake, though during the summer may shift to become more active at night to avoid the heat of the day. Beginning in October these snakes will typically move to overwintering sites, which are often rock crevices or mammal burrows. They are frequently found in basements of homes or barns as temperatures begin to cool and individuals search out overwintering sites. Prey consists mostly of amphibians, fish, earthworms, or other soft-bodied invertebrates, but they may also eat small mammals and young birds. Like other gartersnakes, Plains Gartersnakes do not constrict prey, but instead subdue and rapidly consume prey. When captured, individuals will release a foul-smelling musk and may bite. Males track females via pheromone trails. During the breeding season (April to May) multiple males may attempt to court a single female. Females reach sexual maturity in their second or third year of age. Plains Gartersnakes give birth to live young in late summer, typically July through September, after a gestation period of approximately three months. Clutch sizes range from 5–60 young but are usually from 10–20. The largest known clutch size of a Plains Gartersnake was from a female from Edmunds County, South Dakota who produced 97 offspring.

Species Distribution: Plains Gartersnakes are found throughout the North American Great Plains region, from the Oklahoma and Texas panhandles north to southern Canada, and east through Minnesota, Wisconsin, and Indiana.

South Dakota Distribution: The Plains Gartersnake can be found throughout South Dakota.

Remarks: The Plains Gartersnake is likely one of the most common species of snakes in South Dakota, and most people have likely encountered this harmless species in their backyards. Gartersnakes are frequently called “gardener snakes.” 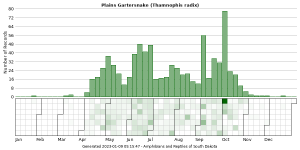 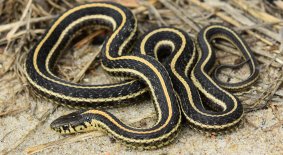 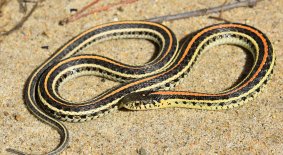