Description: The Common Gartersnake is a slender, medium-sized snake, with adults ranging from 18–30 inches (46–76 cm) in total length. In South Dakota, the Common Gartersnake has a tan or pale yellow middorsal stripe extending down the entire length of the body, with the background color typically gray or dark brown. Each side of the body has an additional pale-yellow stripe on scale rows two and three. Patterning and coloration between the middorsal and lateral stripes can be variable but are generally a red background with alternating black spots. The head is uniformly dark, and faint vertical black bars exist along the upper lip. All individuals have keeled scales, an undivided anal scale, and white or light-yellow ventral scales. Common Gartersnakes are similar in appearance to Plains Gartersnakes but can be identified by the lateral stripe occurring on scale rows two and three (instead of scale rows three and four in Plains Gartersnakes).

Natural History: Common Gartersnakes are typically active from April to October, but this depends on temperature. This active, primarily diurnal snake may become more nocturnal during the summer to avoid the heat of the day. Typically beginning in October these snakes will begin moving to overwintering sites, which are often rock crevices, mammal burrows, or artificial (human-made) cover such as concrete slabs or wood piles. Prey consists mostly of amphibians, fish, and earthworms. Common Gartersnakes do not constrict prey, but instead subdue and rapidly consume prey. When threatened, Common Gartersnakes will often flatten or inflate their bodies, displaying the red coloration between and on the scales. If captured, they will release a foul-smelling musk and may bite. Males typically emerge from hibernation before females and will wait for females to emerge. Once a female emerges, multiple males will attempt to court her. Eventually, a male is successful in breeding, and the female then disperses from the hibernacula. Males stay at the hibernacula attempting to mate with females for several weeks. Females give live birth to an average of 20 young in the late summer. Sexual maturity is typically reached in two years.

Species Distribution: Common Gartersnakes are found across most of the United States and southern Canada but are absent from the Rocky Mountains and desert Southwest.

South Dakota Distribution: Many have suggested that Common Gartersnakes can be found throughout South Dakota; however, records are lacking from the northern and central regions of the state. It remains unknown if this is simply a lack of records or if individuals do not occur in these regions.

Remarks: The Common Gartersnake ranges farther north than any other North American snake. Individuals can be relatively common where they occur. Gartersnakes are frequently called “gardener snakes.” 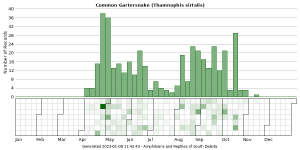 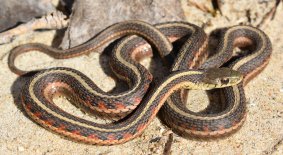 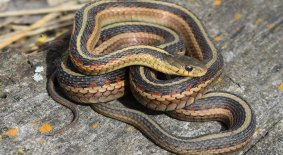