Description: The Lined Snake is a small, fossorial snake, with adults ranging from 8–12 inches (20–30 cm) in length. The background coloration is gray, tan, or brown with three pale-yellow stripes running the length of the body: one in the center of the back and the others along each side on scale rows two and three. The underside is off white with two rows of black half-moon shaped markings that run the length of the body (two marks per ventral scale). The head is typically smaller than a similarly sized gartersnake. Juveniles are similar in coloration to adults. Individuals have keeled scales and an undivided anal scale. Lined Snakes are similar in appearance to both the Common Gartersnake and the Plains Gartersnake but can easily be differentiated by the presence of the half-moon markings on the underside.

Natural History: Information on the natural history of this species is limited, especially at the northern edge of its distribution. The Lined Snake is active from April to October and may be active in November, provided warm temperatures. Like other snakes, Lined Snakes are secretive and solitary. Individuals can be close together while overwintering and when males seek out females during the reproductive season. Overwintering sites are typically mammal burrows or crevices along bluffs. Lined Snakes are most often observed by searching under objects they are sheltering under, such as rocks and logs. There are often a few days in the spring and fall when individuals are emerging from, or returning to, overwintering sites when they can be found crossing roads. Lined Snakes feed primarily on earthworms and other small invertebrates. Like many snakes, this species will release a foul-smelling musk if captured but will rarely bite. Lined Snakes give birth to live young, typically in mid-August. The clutch size ranges from 2–12 individuals (average of 7). The exact reproductive timing of Lined Snakes in South Dakota is currently unknown. Mating is thought to occur in September or October after females have given birth and again in the early spring after emergence from overwintering sites.

Species Distribution: This species has a distribution across much of the Great Plains and the Rocky Mountains. Populations span from southern Texas and reach their northern limit in southeastern South Dakota and the southwest corner of Minnesota, and isolated populations exist in Wisconsin, Iowa, Illinois, Colorado, and New Mexico.

South Dakota Distribution: Lined Snakes have a limited distribution in South Dakota and are found along the Big Sioux River as far north as Palisades State Park in Minnehaha County. Recently, a population of Lined Snakes was discovered in Hutchinson County, which may suggest additional populations along the James River.

Remarks: This species can easily be mistaken as a juvenile gartersnake, especially without closer examination. Roads can be a major source of mortality for individuals. In other parts of their range, the Lined Snake can be extremely abundant, even in residential areas. 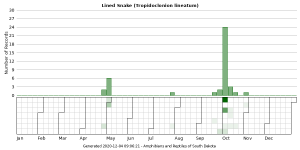 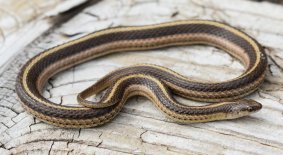 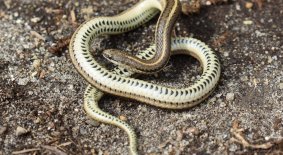